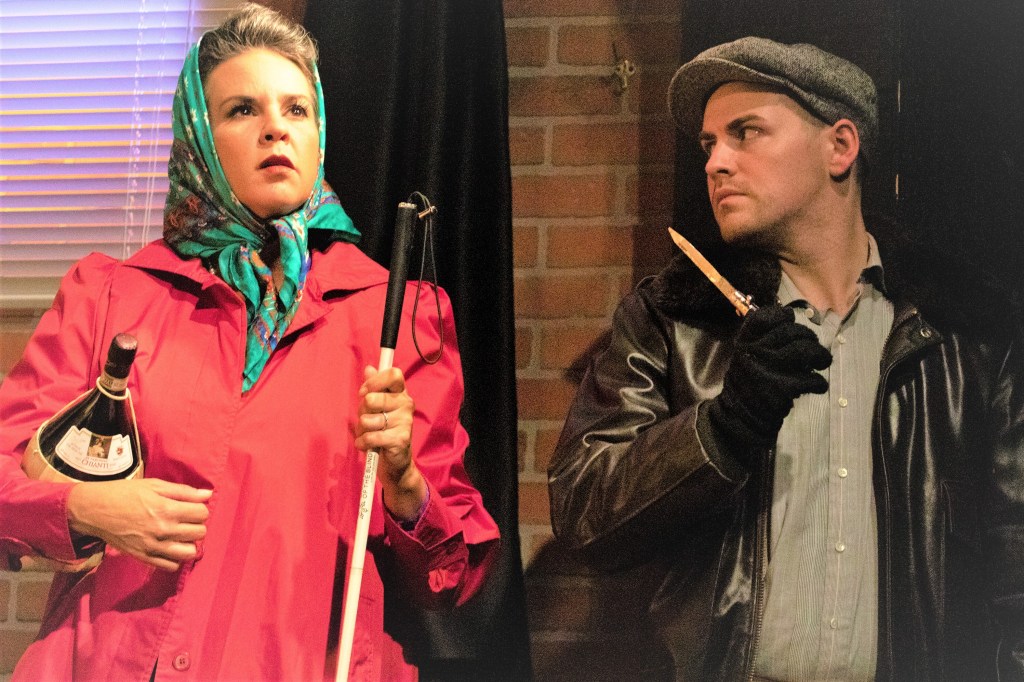 Randy Anger of the Plotline Theater Company is not playing it safe. The director, actor and musician loves a challenge and has found one more in his current show. “Wait Until Dark,” written by Frederik Knott and adapted by Jeffrey Hatcher, will run through October 2 at the Martinez Campbell Theater.

You may remember the 1967 movie starring Audrey Hepburn, Alan Arkin and Richard Crenna. Director Terence Young has created all the fear and tension necessary to tell the story of a blind girl who is terrorized by three thugs in search of a heroin-stuffed doll they believe is hidden in her apartment.

On a film set, cast and crew can do multiple takes and put together the best shots together, but they only have one chance to do it right on stage with an audience. Anger and his talented cast do not disappoint.

Kieran Cross (Harry Roat) once again creates a multi-dimensional character with plenty of charm and intelligence to go along with his cruelty as Susan’s mad enemy. Bill Dietz (Mike Talman) and Craig Anderson (Carlino) complete the trio of villains. The two create images of nice guys to convince Susan to trust them with Justin Hernandez skillfully portraying Susan’s hardworking husband, Sam.

The smart cast is rounded out by 11-year-old Journi Copes Harvey (Gloria). Sam hired Gloria to help Susan around the apartment when he left. Although Gloria is less than helpful at first, she pulls through when Susan’s life is in danger.

Given the suspense that must be created in this show, the cast needs the help of a good set designer and a good team. Luckily they had both with Diane McRice working her usual set design magic, Sandra Gardner on costumes and Todd Drummond and Dave Pursley designing the most prominent lighting effects expertly handled by Annie Jarrett. To book, go to campbelltheater.com. The theater is at 636 Ward St. in Martinez.

The company tours throughout the Bay Area, including performances Oct. 7 and 8 at the Lesher Center for the Arts at 1601 Civic Drive in Walnut Creek. For tickets, call 925-943-SHOW or visit lesherartscenter.org.

San Francisco: I can best describe “Moulin Rouge! The Musical” as a delicious bombardment of the senses. provocatively and staring defiantly at the audience.

And then the show begins with the fabulous orchestra leading stunningly dressed performers through music from Offenbach to Lady Gaga, complete with spectacular dance sequences including the club’s famous Parisian Can Can.

It’s almost too much that your senses are overwhelmed by so much sound and glare, but that’s what this Moulin Rouge, where bohemians and Parisian aristocrats mingle, embodies. It’s an inside look at artists and the passions that drive them and attract others.

At the heart of the musical is a love story that rivals the tale of Romeo and Juliet. Here, Moulin Rouge star Satine (Courtney Reed) falls in love with struggling writer Christian (Conor Ryan) much to the dismay of club owner Harold Zidler (Austin Durant). Zidler essentially sold Satine to the wealthy Duke of Monroth (David Harris) in exchange for funding his struggling club – a bit of an enigma for everyone involved.

While the entire cast does a superb job creating characters with distinct personalities, it’s Broadway veterans Reed and Ryan who, of course, carry the show. Both of these performers have such exceptional voices and acting abilities, it’s thrilling to watch them work.

In keeping with the show’s theme of celebrating artists, BroadwaySF commissioned Tenderloin resident Diego Gomez to create a mural on the Hyde Street side of the Orpheum Theatre. The mural embodies the “bohemian ideal” of truth, beauty, freedom and love.

“Public art is essential for a vibrant community, and it was exciting to think of what the four bohemian ideals of Paris would look like at the turn of the last century with a modern twist of San Francisco,” Gómez said. “For each of the four arched panels, I incorporated a mixture of Toulouse-Lautrec’s Moulin Rouge paintings, the 2001 ‘Lady Marmalade’ sequence from Baz Luhrman’s film of the same name, the opera ‘La Bohème’ and the chaotic maximalism of stencils and graffiti to match the energy of downtown San Francisco.

Winner of 10 Tony Awards, “Moulin Rouge! The Musical” continues through November 6 at the Orpheum Theater at 1192 Market St. in San Francisco. For tickets, go to broadwaysf.com.

Sally Hogarty can be contacted at [email protected] Read more of her reviews online at eastbaytimes.com/author/sally-hogarty.