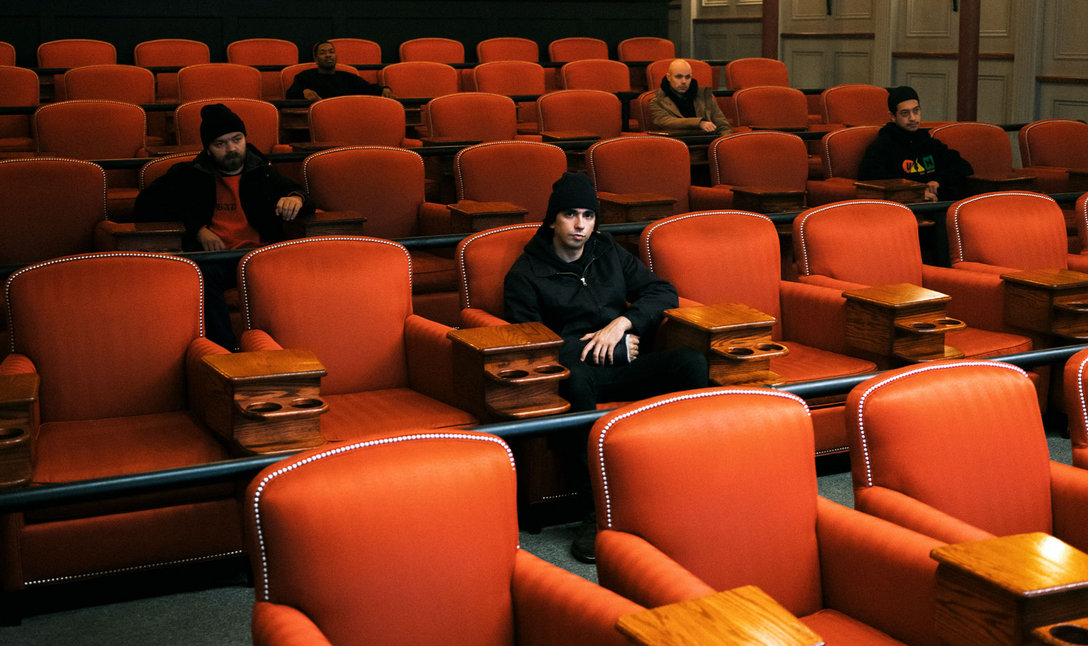 Vein.fm Explore the Horrors of the Mind on “This World Will Destroy You”

In many ways, loneliness can be a double-edged sword. As Anthony DiDio, Vocalist of Boston Metalcore Slayers Vein.fm, says, “Being alone, or even just being at home, literally or figuratively, can be bigger than the outside world around you.” There is an intensity of perception that coincides with long periods of isolation, a state of consciousness and hyper-vigilance that can, under the right conditions, lead to despair and delirium. Or, as DiDio puts it, “Due to the amount of bullshit you can uncover about yourself and uncover in your mind, this can be one of the scariest places ever.”

For the uninitiated (or the faint-hearted), Vein.fm’s aggressive heckling comes close to capturing that feeling of loneliness and woke dread. Jagged riffs pierce and stab; dissonant panic chords scratch and howl; concussive drum gunfire crashes and explodes, while DiDio’s cries of pain twist reality into harrowing shapes. Appearing on the New England hardcore scene, the quintet tested their live show in the same high-intensity pressure cooker that forged luminaries like Converge and American nightmare. In the end, putting down roots in such fertile soil proved fruitful, resulting in chaotic stage performances at full throttle, propelled by relentless dives, wayward windmills, mic grabs and mosh pits whipped into a frenzy of restless limbs.

This livewire energy translated effectively into 2018 error area, where Vein.fm’s innovative metalcore sound merged with nu-metal, post-hardcore and other eclectic influences alongside DiDio’s lyrical exploration of digital space and automation. “We had a lot more house and drum & bass elements,” DiDio says of the band’s acclaimed debut album. “It was much brighter, more energetic, futuristic. This time around, it’s a bit more gross.

At This world will ruin youtheir second studio album for Closed casket activities/Nuclear Explosion Records, Vein.fm transforms the disc’s guiding motif into something intimate, perverse and incisive. If their first album was the band’s terminator– elegant, mechanistic and ruthlessly efficient – ​​then its sequel is a Freddy Krueger fever dream, beating, blood-soaked and irrevocably haunted.

“We had a plan and there was a vibe; there was a vibe in mind,” says DiDio. “We tapped into a lot of different types of sounds, with instruments and sample choices that added to the overall palette. But also, I think a lot of those things were just, very naturally, the reflection of how we felt. To bring the record to life, Vein.fm changed the proximity of Massachusetts to Belleville, New Jersey and Graphic Nature Audio, bringing together Grammy-winning producer Will Putney (Reversed, Every time I die) in April 2020, as the world came to a standstill. More than anything, says DiDio, the intentional push of This world will ruin you isn’t pandemic-related – it’s an experiential journey punctuated by sensory overload. “It’s a personal best and I want people to enjoy it like they would a really intense movie or a psychedelic trip.”

Yet for all their sonic extremity, it’s clear that Vein.fm places just as much emphasis on paratextual elements beyond the purely auditory. Designed with friend and illustrator Autumn Morgan (code orange), the illustration and typography of This world will ruin you reaffirms the band’s holistic approach to aesthetics, drawing in potential listeners with curious insight into the horrors that lurk within. Unlike the bloody surgical close-up that adorned error area, the disc’s evocative cover offers a visceral collage of disjointed images, where flesh, flames, buildings and landscapes collide in violent proximity. “When you look at him, you feel like you’re about to step into that house or step into the universe that he came from,” DiDio says. “It looks crazy, like a movie poster or something. It’s like there’s another dimension coming out of it.

Although it looks like a promotional still from The cabin in the woods, this gesture towards the cinema is not limited only to the cover and the packaging of the album. The Max Moore-directed music video for the devastating first single “The murderous wombfeatures a beleaguered miniature house and a bloody decapitation worthy of Hereditary. While longtime collaborator Eric Richter’s video for “Wavery“channels the surreal, hypnagogic contours of the mind, drenching the group in sepia tones and shadows that evoke the cosmic existentialism of Fountain (2006). When asked what exactly awaits inside listeners brave enough to cross that dimensional threshold, DiDio pulls no punches. “A strange and nostalgic nightmare. It’s nostalgic in the ugliest way possible. Nostalgia and lots of trauma, that’s what it sounds like.

Nostalgia is a curious thing. In today’s globalized world, it is the dominant mode of cultural production; a melancholic longing for a specific place and time that is found in everything from music to television and film. Is this the project that Vein.fm had in mind from the start? A rush towards sentimental escape and a hard-hitting return to the familiar? “I think nostalgia is great,” says DiDio. “But I also think that a lot of the time people use nostalgia in a really pornographic way, and they don’t really like to bring out the kinds of feelings that they should, so it becomes more of a dumb thing back backward.”

Avoiding familiarity for the weird and weird, Vein.fm ensures that It’s the world that will ruin you is more concerned with using home breaking as shown anti– nostalgia, which is manifested by a collection of annoying sounds and sensations that do not belong. “It’s almost like nostalgia for something you haven’t experienced yet,” DiDio says. “This really dark, really dreamlike, nightmarish feeling, where something just doesn’t make sense.”