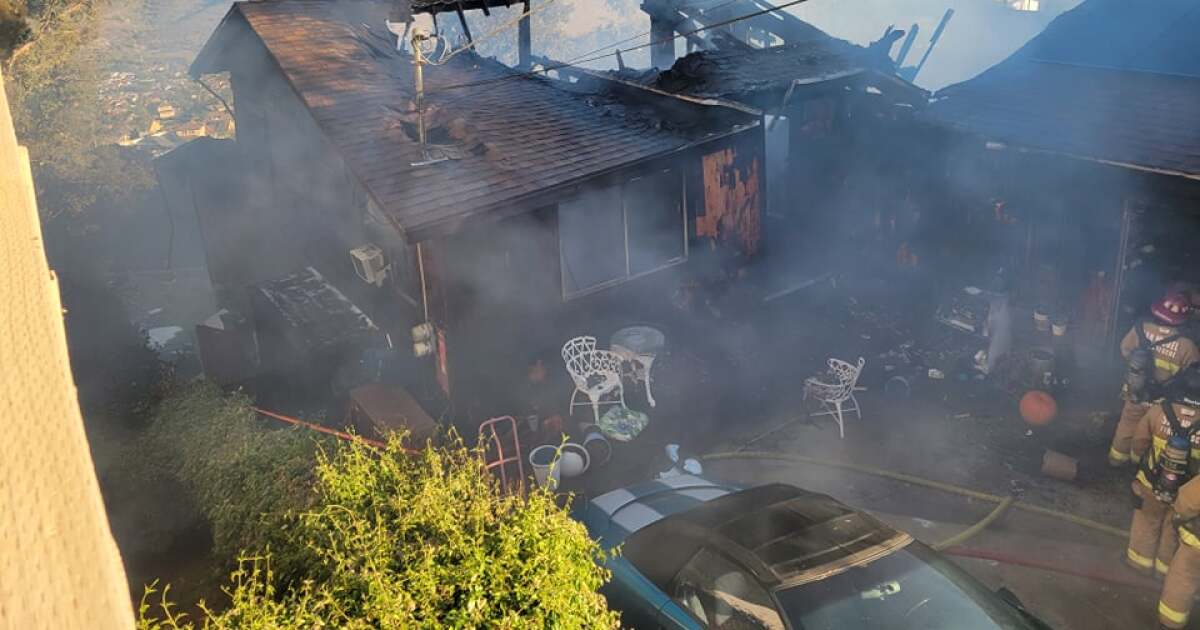 No one was injured, according to Heartland Fire & Rescue Department.

Firefighters were called around 12:30 p.m. about the San Bernardino Avenue fire near Date Street in the La Presa neighborhood.

An outdoor propane barbecue was in use and was temporarily unattended when the fire started in one of the homes, said Andy Lawler, division manager of San Miguel Fire & Rescue, which responded to the blaze.

The wood siding on the house caught fire from the grill, Lawler said. Then the fire spread from the side of the house to the attic, and eventually to the rest of the house.

Two people were in the house when the fire broke out, Lawler said. They tried to put out the fire, he said, but couldn’t find a fire extinguisher, so they called 911.

The fire eventually spread to the neighboring house. The neighbors who live in this house were out of town at the time, Lawler said.

Most of the fire took about 90 minutes to put out, Lawler said. It took a long time in part because it was difficult to get enough water, given that the houses are located on a hill, Lawler said. There was a fire hydrant about 800 feet down the hill, he said.

He also noted that the original house had underground space so there was a fire below grade that compromised the structure. A firefighter fell through the ground, Lawler said.

The fire caused more than $ 2 million in damage to homes and contents inside the homes, Lawler said.

Natalie Barber said the house where the fire started had been owned by her parents, Cynthia and Robert Hathcock, for more than 40 years. Her parents, as well as her sister and other members of her family, all lived there; now they’re all displaced, Barber said.

Barber’s mother returned from shopping on Saturday to find her house ablaze, Barber said. His mother ran inside to save the family’s two dogs, a miniature pinscher and an Anatolian Shepherd, and to make sure her son-in-law was not in the house. The family have three cats, but they couldn’t find them, Barber said.

The family lost clothes, childhood photos, wedding albums, heirlooms, memorabilia, custom-made family furniture, medications, documents and car keys, among others, Barber said . Barber’s father owns an accounting business and his computer and business records have all been destroyed, she said.

The family were only able to recover a few items from the fire, including documents and Barber’s sister’s wedding ring.

“We are devastated,” Barber wrote.

Barber launched a GoFundMe on Sunday morning to raise money for his family’s recovery.

“They appreciate any support,” Barber said of his parents.

Is Pete Davidson Rocking Hickey courtesy of Kim Kardashian, or is his body getting weirder and weirder?