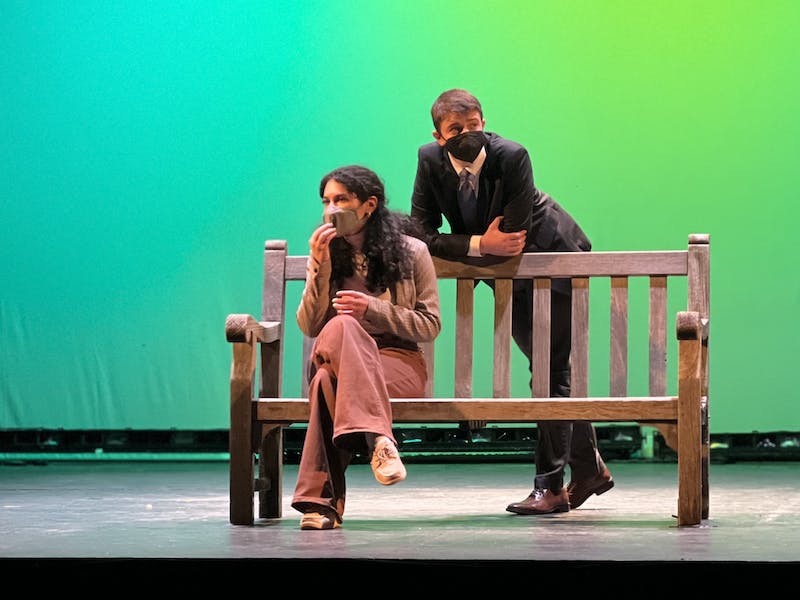 Theater Intime’s Freshman One-Act Festival (FOAF), which held three performances last weekend, captured what theater does best. Four short plays – each directed, performed and produced by members of the class of 2025 – examine what it means to live a mundane life, how to live in times of crisis and what stage medium can be. Great art asks more questions than answers. In this regard, FOAF was a resounding success.

“You work at the cash register at Albertsons”

The first show, “You work at the cash register at Albertsons” by Christian St. Croix, is an exercise in absurdism that takes place in a grocery store. Four clerks speak in the second person and describe variously odd and mundane situations, each beginning with “You are working the cash register at Albertsons when…” Sometimes these disparate stories meander towards philosophy or romance, dramatic fantasy or hypernormal realism. But the writing – between “Welcome to Night Vale” and Tennessee Williams – is consistently factual, painting all the stories in the same light: that of a cashier’s painfully mundane life.

The actors, Fatima Diallo ’25, Ian Grimm ’25, Kate Stewart ’25 and John Slaughter ’25, triggered absurdism. They describe stories in which “you” are the protagonist, and they deliver their lines as if they were making them up on the spot. We see our stories being built in front of us. And if there’s a theme running through all of these stories, it’s feeling trapped in a basic, thoughtless existence: you watch the actors build cages around themselves through their stories. The play is about escaping the mundane, or at least trying desperately to find joy in it, both to no avail.

Emily Yang ’25 directs with a light hand: her four actors stay at their crates for virtually the entire 15-minute duration of the scene. It makes the rare moments of movement, like Grimm stepping on his crate and shouting “There’s a sun!”, a pleasant shock. And playing the show with The Talking Heads’ “Once in a Lifetime” — complete with the chorus “Same as it ever was, same as it ever was” — is a nice touch.

The second show, “Joan of Arkansas” by Sheri Wilner, is a discreet call to hope. In a scene rich in metaphors, we watch two college students – Dennis (Harit Raghunathan ’25) and Laura (Nathalie Charles ’25) – study in a library and hold a meandering conversation.

Raghunathan is a contributing puzzle builder for The Daily Princetonian.

The scene reaches its emotional climax when the conversation culminates in a grim question: would you rather die or spend your life in prison? Dennis and Laura respond differently, and Raghunathan and Charles each exhibit complete certainty in their answers.

The show is then revealed as a test of hope: indeed, what is the answer to suffering? Is it better to hope naively for the future or to practice enlightened cynicism? The actors, under the wise direction of Daniel Viorica ’25, force us to live in this dichotomy for the duration of the show. In doing so, they force us to question our own perspectives. That’s what art should do, and this show does it well.

Viorica is associate editor of satire and editor of The Prospect for the “Prince.”

“The story of two spectators”

Get the best of ‘the prince’ delivered straight to your inbox. Subscribe now »

The third show, “A Tale of Two Spectators” by Peter Manos, was the best of the bunch, in my opinion. We watch a man (Charlie Roth ’25) and a woman (Laura Reyes ’25) sitting on a bench. In turn, they watch his wife and her ex-boyfriend, who have sex in a public park.

Roth is assistant data editor and news editor for the “Prince”.

We watch them watch them. Indeed, Roth spends most of the show wearing a pair of opera glasses and staring at the audience, staring at the adulterous pair. Reyes even eats out of a bag of popcorn. Roth happened to stare straight at me in the audience for most of the show – I had to sit where the imaginary couple copulated. I couldn’t help thinking what it means to look at others. I watched theater and the theater watched me. I was put off by the voyeurism of the actors, until I realized that I was occupying exactly the same role: what was I doing, sitting in the house, but watching a scene that I probably shouldn’t be?

Roth played a low-level earner; Reyes was a desperate loner trying to smoke a cigarette. Both of their relationships are, clearly, toast. But somehow, these two, brought together by unfortunate circumstances, become involved in their common fate. Aidan Iacobucci ’25 choreographed the action beautifully: the actors move in sync, even in small tilts and gestures.

Iacobucci is a news editor for the “Prince”.

Indeed Roth and Reyes together are a revelation. Roth’s realism, dry wit, and nasally deadpan blend brilliantly with Reyes’ attitude, drama, and determination. They certainly put on a great show ogling the couple, but their best acting is when the couple leaves and they’re left alone. The actors engage in extremely dry little conversations – revealing what has been driving them all along.

The final show, “Medea” by Wendy Wasserstein and Christopher Durang, is a delightfully over-the-top entanglement with the classic. The show reads like a ragtag cast of actors who read Medea years ago and tried to piece it together from memory, performed to hilarious effect.

It is a colorful and abstract collage from a play. Max Peel ’25 stars as the lead, strutting the stage in a mismatched pastel sweater and skirt. There’s a character named “Deus Ex Machina” who says she would have been airlifted from the rafters, into a show with a bigger budget. Medea, wracked with guilt, lays down and screams “I need a creative outlet!” At one point, the chorus forgets what show they’re on and starts performing “The Trojan Woman”.

The show ends – you can’t make this up – in song: a techno version of “Camptown Races” with new lyrics about not killing your kids, with party lights and dancing in the aisles.

Was it Euripides’ “Medea”? Of course not. But was it great theatre? Absoutely. Entitling a piece “Medea” gives an expectation – a pretentious, literary expectation. Wasif Sami ’25 and Le’Naya Wilkerson ’25 lead a “Medea” that refuses to be traditional. It’s dripping with wild elk. She’s the best “Médée” I’ve seen.

Gabriel Robare is the co-editor of the puzzles. He is also a lead prospect writer and a news writer. He can be reached at [email protected] or on social media at @gabrielrobare.

Buffalo Sabers play one outdoor game in a month