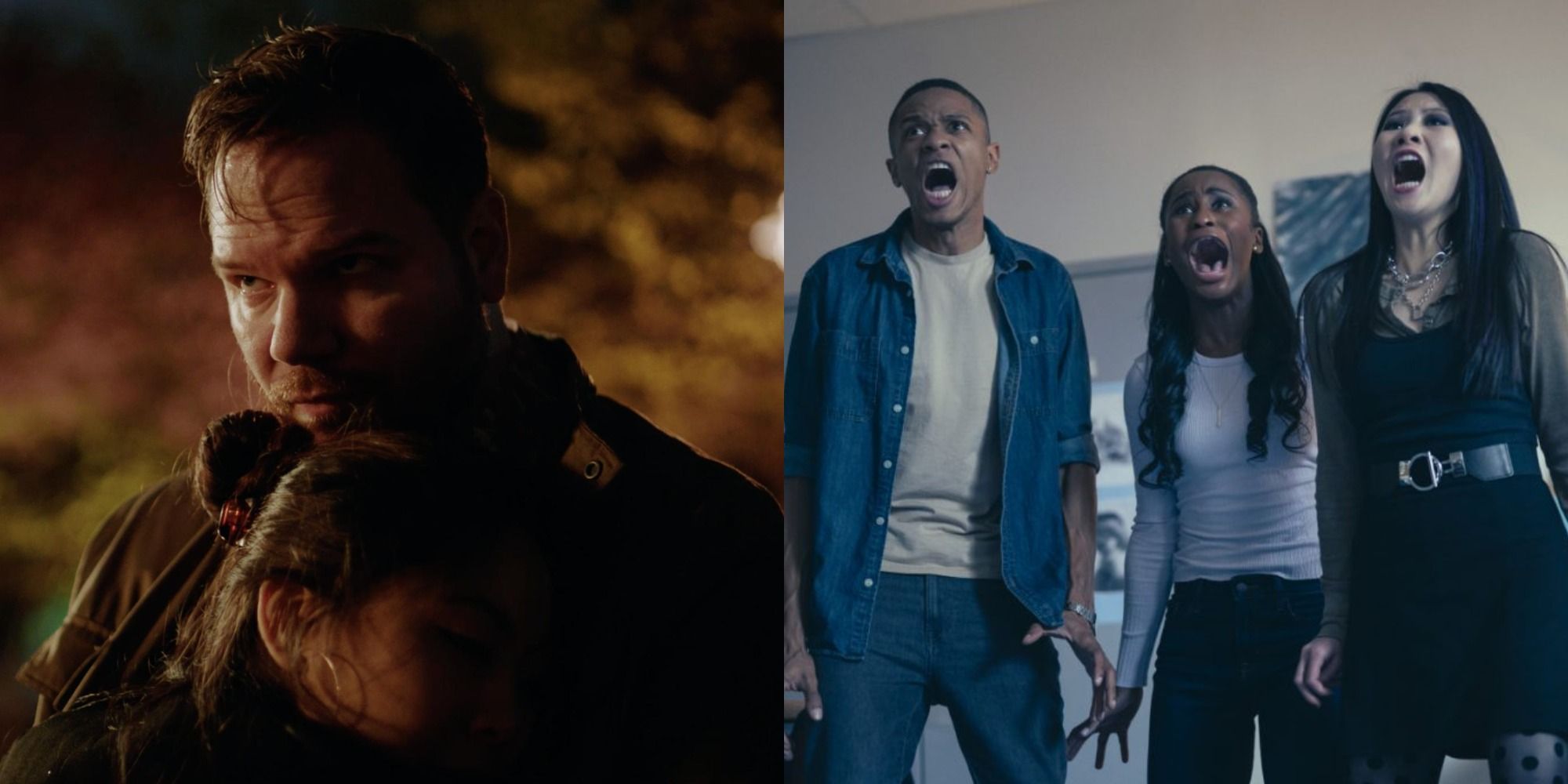 The 10 most terrifying stories to date

The r/TwoSentenceHorror subreddit showed that sometimes all it takes is two sentences to sow terror. The CWs Horror stories in two sentences entered its third season to bring these bite-sized terrors to life.

The anthology is saturated with ghosts, demons, murderers, and a plethora of other things that jostle in the night. Whether the monsters are supernatural or human, many episodes of Horror stories in two sentences unleash nightmarish tales on his audience. From home invasions to demonic possession, there are so many opportunities for a big scare, and viewers looking for a thrill may wonder which episodes are most likely to have them cowering under the covers.

The first episode of the second season comes from the two-sentence story, “Be cool, stay in school. It’s easier for me to join you.” “Bag Man” features a group of children in detention who fall victim to a seemingly harmless backpack with a very dark attachment.

No one wants to be stuck in detention, and certainly not with a white-faced demon that lives in a backpack. Watching these teenagers confront this murderous entity head-on causes panic in a passive audience who can only watch helplessly as the poor decision-making that leads to their deaths. Although these poor choices may lead some to say “they planned it”, which siphons off the terror a bit.

In “Only Child”, a grandmother, Desi, finds herself at odds with her demon-possessed grandson. Fittingly, this story comes from the phrases, “My grandson got his big, beautiful smile from me. It never wavers on his face as he watches me die.”

Related: The 10 Most Malevolent Demonic Possessions In Cinema

Dealing with a demon in any capacity normally warrants some terror. The thought of a sweet grandmother trying to exorcise a demon from her possessed grandson while he and his parents plot against her is deeply disturbing. The way this episode uses hellish forces to pit a family against each other is certainly disturbing, but killing the main character with an asthma attack is a little underwhelming.

“Essence” is based on the micro-story, “I always admired her looks. And then I found out who she ate to get them.” The episode follows a young salon worker who discovers her boss is eating the women who work there to preserve her beauty and youth, then bottles their life force to sell as VIP treatment.

This episode gives new meaning to “body horror” by giving gore a place in the beauty industry. The stark contrast between butchery and beauty is incredibly unnerving, especially in a scene that shows the boss grotesquely devouring human organs. Unrealistic beauty standards for women are scary enough. To imagine that the only way to reach them is to kill and eat people’s organs is terrifying.

From “I swore I woke up. But the monster is still there, smiling above me,” comes the haunting story of a woman who harnesses her telepathic abilities to save her comatose sister from the clutches of a demonic entity.

Being attacked by a dark, otherworldly monster is enough to scare anyone. Now add the layer of being in a coma, unable to move or speak while the demon goes about its torment. It’s a true chilling scare that leaves viewers feeling just as helpless. The promise of evil having no power over brotherly love is hardly heartwarming with an ending that shows the creature alive and well outside his window.

To hide is based on the phrases “Knock, knock, I heard. But the monsters had already found their way inside.” This almost classic home invasion story tells audiences the story of a Hispanic mother fighting for her own survival and that of the little girl she is babysitting.

Watching this heist play out is enough to have any onlooker looking out the window for signs of a masked assailant. The episode capitalizes on the power of horror to make someone feel uncomfortable in their own home after watching. As if that weren’t enough, the episode ends with the heartbreaking implication that the hero’s life is about to turn upside down as ICE agents show up at her home.

“Quota” takes, “We work each other to the bone. And when we die, they replace us,” to new levels with a quintessential zombie outbreak story. The episode takes place in a warehouse where workers quickly fall victim to the virus and the crazed cannibalism that comes with it.

Related: The 10 Best Zombie TV Shows, According To IMDb

This story brings the exact brand of terror you’d expect from any zombie movie or TV show: blood, gore, some great fights to kill or be killed, and impending apocalyptic catastrophe. The ending offers a compelling cliche by showing the virus making its way out of the burning warehouse and out into the world, creating the exact alarming zombie story the series needed.

“She was stiff and cold in my arms. Then the doll blinked.” This chilling concept gives way to an equally chilling twist in the series’ first episode. Hana, a young mother, begins dating Ken, a man dangerously obsessed with women who have babies.

The ending gives the viewer a sense of victory seeing Hana kill Ken before he can do any real damage, but the reveals that his child is actually just a doll is the terrifying shock factor that is unmatched by any other episode. After spending an entire episode cheering on Hana, audiences almost feel betrayed when they find out she’s completely delusional.

The lines, “‘I’ll never leave you,’ my husband whispered as he climbed into bed last night. I woke up gasping as the suit he was buried in twisted around my neck”, inspired “Legacy”. The episode tells the story of a woman whose deceased husband is as violent towards her in death as he was in life.

The terror in this episode comes from the heartbreaking theme of abuse. The fact that the widow couldn’t even escape her attacker once he died is chilling, and the ghostly images of a blue-faced man in a funeral suit crawling under the covers doesn’t make the story any more easy to digest. The villain of this episode is one of the most terrifying in the series because his humanity is what makes him the monster.

The chilling prompt, “Alone in the morgue, I hear small footsteps. My daughter has finally come back to me,” brings “El Muerto” to life. The story takes viewers into the world of a little girl haunted by the ghost of a troubled boy in a morgue where her mother works, only to find that she herself is dead.

The episode’s sweet ending doesn’t make “El Muerto” any less terrifying. The plot uses classic ghost tropes– flickering lights, slamming doors, screaming apparitions. A scene where the little girl gets stuck in a mortuary cabinet tops all the spirit-focused scenes in the series so far. Plus, the only thing scarier than a little ghost child is two little ghost children.

With a prompt like “I felt my skin crawling. Then I saw the worm’s head peeking through,” the venereal horror of “Squirm” really packs a punch. The plot adds a new element of terror by following a young woman who has been drugged and assaulted by an anonymous assailant who turns out to be her boss.

Although gruesome, the horror of “Squirm” extends beyond the imagery of living worms taking up residence in the human body. It takes audiences out of the fictional world of Horror stories in two sentences in favor of a real-world horror, which makes it so much more gruesome than the rest. The plot explores terrifying and sadly very real elements of sexual assault in a way that manages to make viewers squirm in their seats.

NEXT: The 10 Best Horror Movies Of The 2010s, According To Letterboxd


Following
The Big Bang Theory: each season ranked by rating

Gabby Etzel is a Manhattan-based writer with an affinity for the dreadful and an inexplicable identification with Throg. She’s easily charmed by two things: a well-written villain and a smoked salmon bagel.