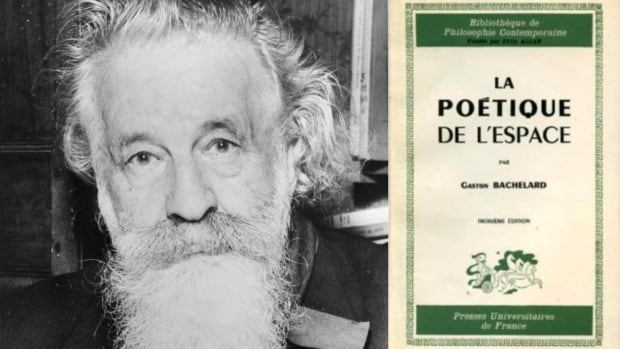 Room with a view: 60 years later, the ideas of Gaston Bachelard still ignite our imagination

“The house shelters daydreaming, the house protects the dreamer, the house allows you to dream in peace.”

So wrote Gaston Bachelard (1884-1962), the French postmaster turned physicist turned philosopher, in what was to become his most famous work, The poetics of spacea philosophical and literary meditation on the imagination — and on the idea of ​​the house as a metaphor for our interior landscapes.

First published in French in 1958, the English translation of the book appeared in 1964 and became a classic.

what is it exactly The poetics of space? That’s a tough question to answer, according to Boston College philosophy professor Richard Kearney. Bachelard’s work inspired Kearney’s life and work.

“It’s a unique kind of book. It’s not strictly speaking just philosophy, or just psychoanalysis, or just literary criticism, or just memoirs, or just an essay, or just some sort of good advice for architects, engineers and designers.

“It’s all of these things and nothing else at the same time. It’s a unique hybrid invention. It’s a poem in a way, you could say a philosophical poem, a meditative poem open to all.”

“Every corner of a house, every angle of a room, every inch of secluded space in which we like to hide or withdraw into ourselves, is a symbol of loneliness for the imagination.” – Gaston Bachelard, The poetics of space

For poet and biographer Molly Peacock, The poetics of space is a “talisman book”. She first encountered work more than 50 years ago, when she was 19, while a university student. It was a revelation.

“The first time I read The poetics of space, I was delighted. I felt shock after shock of recognition. [Bachelard] was saying things that I had always felt but never articulated.

“There’s this feeling that our cloudy, less clear thoughts are happening in the lower levels, underground,” Peacock explained. daydreams as we reach the attic.”

She suggests if there is a single idea to remember from The poetics of space“is that your emotional architecture and the architecture of the house are one.”

“Beyond our memories, the house in which we were born is physically inscribed in us.” – Gaston Bachelard, The poetics of space

In 2021, more than half a century after first picking up the book, Peacock has turned to it again, like balm during a time of upheaval. She was 73, the pandemic was raging, and her husband was in the final stages of his life.

She needed an anchor. And she found it: a red hardcover book, its pages yellowed, with its original pencil marks in the margins.

“During my husband’s last illness…I needed refuge. The poetics of space offers shelter. It provides security. And in crisis mode, I might turn to the idea of ​​doors, chests, and cabinets. The idea of ​​nests, the idea of ​​shells… corners, for example, pockets… miniature spaces, mini houses.

“It was a great consolation to me. It’s a book about refuges, and the book itself became a refuge.”

“Beyond our memories, the house in which we were born is physically inscribed in us.” – Gaston Bachelard, The poetics of space

Shelter. A place to dream. A place where our memories are born and where they continue to reside.

The ideas taken from The poetics of space also live and breathe in the paper-thin porcelain boxes created by Irish ceramic artist Isobel Egan.

“These little boxes store the memories of our lives. Little memories that are truly sacred to us and that we can draw upon at different times in our lives.”

“Our soul is a dwelling. And by remembering houses and rooms, we learn to dwell in ourselves.” -Gaston Bachelard

“The house has a soul”

“The house is very close to our intimate, bare skin,” says Finnish architect Juhani Pallasmaa, whose own designs and thinking were deeply influenced by Bachelard’s writing.

Pallasmaa sees our homes as living creatures and compares our relationship with our homes to those with our spouses, our children, our most intimate. Pallasmaa thinks we should consider Bachelard as a compass.

“The notion of home,” he said, “is understood today in terms that are too pragmatic, concrete and material, but also in economic terms. Home has a soul.”

For British writer and social historian Ken Worpole, Bachelard’s book grows in importance, especially as populations age. When Worpole began working with architects and designers in the design of hospitals and hospices, he turned to The poetics of space as a guide.

“I think it’s a book like The poetics of space which made architects realize that when you design hospitals and hospices, you are not designing cells. You design rooms, and the atmosphere of those rooms…it’s a particular room that so many people find themselves in at the end of their life, which is often a bedroom or a hospital room, and their place is a bed,” Worpole said. .

“This room has to give back whatever the person in the bed wants to give it. We have to give them a home again.”

As the world faces refugee and environmental crises, Molly Peacock points out that The poetics of space provides an important reminder. It underscores the most fundamental of truths: that our homes are paramount.

“Think of the ways that people return to their homes over and over again to reclaim them. They return and reclaim, because this refuge, this prototype of the home of childhood is in there. Not recognizing the importance of home, of the primacy of the need for people to have a place to live, is in my view the path of defeat for the way we govern our nations,” said Peacock.

“And that’s the importance of The poetics of space. This piece that each of us carries with us is what is traumatically in danger.”

“In every great work, no matter how dark,” said Richard Kearney, “there will be found a moment of what Bachelard calls epiphany – a moment that steps out of chronological time and gives us hope that things can be different.”

He believes that Bachelard also offers an alternative universe, not of escape but rather a form of vital and “responsible” daydreaming.

“In the midst of the horrors of the 20th century and indeed of a philosophy of anxiety, worry and terror,” said Kearney, “Bachelard, without denying any of this, opens up a space of welcome and joy One of his contemporaries, Paul Ricœur, summed up Bachelard’s philosophy by saying, it’s the joy of yes, in the sadness of no.”

Guests in this episode:

Aurosa Alison is Professor of Landscape Aesthetics at the Politecnico di Milano and of Digital Aesthetics at the University of Naples, Federico II. She is editor-in-chief of the international journal Bachelard Studies. His doctoral thesis was on the work of Gaston Bachelard The poetics of space.

Isobel Egan is a ceramic artist living and working in Ireland. His work is in several permanent collections, including the National Museum of Ireland, Dublin and the Taipei County Yingge Ceramics Museum, Taiwan.

Richard Kearney holds the Charles B. Seelig Chair of Philosophy at Boston College and has been a visiting professor at University College Dublin and the University of Paris (Sorbonne). He is the author of 25 books on European philosophy and literature.

Juhani Pallasma is an architect, professor emeritus and writer in Helsinki. He is a former rector of the Helsinki Institute of Industrial Design. His many books include The embodied image, The Thinking Hand, The architecture of the imageand skin eyes.

Molly Peacock is a distinguished North American poet and biographer, author of The Analyst: Poems and Flower diary: in which Mary Hiester Reid paints, travels, marries and opens a door about the neglected Canadian painter. His last poetic essay, A friend browses a poemwill be published in the fall of 2023 by Palimpsest Press.

Ken Worpole is a writer and social historian, whose work includes books on architecture, landscape and public policy. A new edition of his book Designing Modern Palliative Care: The Architecture of Palliative Care (Routledge, 2009) will be published in 2023. His most recent book, No matter how many skies have fallen, is a study of a wartime Christian pacifist community in Frating, Essex.

*This documentary on The Poetics of Space by Gaston Bachelard was directed by Alisa Siegel.