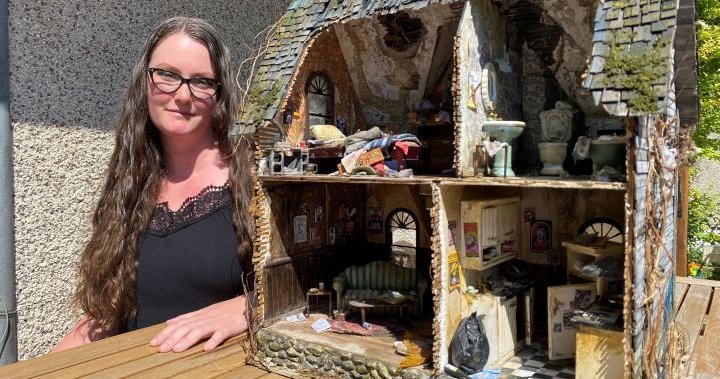 Taking on a fun project can be a great boost when you miss work due to an injury.

For a Calgary woman, it led to surprising success in the Stampede spotlight.

Haley Herrington has spent the past 10 years painting sets for film and television productions.

“I was off work with an injury,” Herrington said. “And I needed something to do.”

That something turned out to be an elaborately decorated and extremely decrepit version of a traditional dollhouse.

Herrington was able to put many of the skills she developed to good use while helping create sets.

It was a project that began with a purchase made by Herrington after an unexpected discovery online.

“A vintage dollhouse kit from 1981, never opened,” Herrington said. “Then I went crazy with it and it became kind of a party house.”

Albertans amazed by Kevin Costner while filming a movie

Dilapidated inside and out, the dollhouse includes miniature objects such as scattered beer cans and a fridge full of rotting leftovers.

A friend suggested that Herrington enter her into the Calgary Stampede’s annual Creative Arts and Crafts contest, over all the more traditional entries.

The people organizing the event had never seen anything quite like Herrington’s dollhouse before, so she was quite surprised when she won a few first place ribbons.

“The judges were drawn in by its uniqueness, the level of detail,” said Amber Parkhill, Stampede Creative Arts and Craft Committee Member. “We all thought it was amazing.”

Herrington hopes to be back to work soon.

In the meantime, she is relishing her success at the Stampede.

“I feel really lucky that they chose mine,” Herrington said. “It was amazing.”