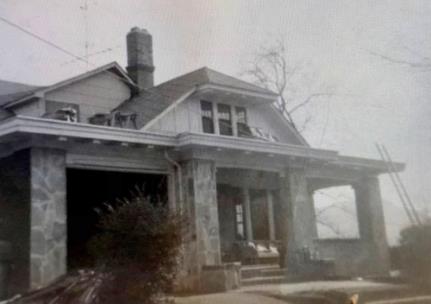 Many of the ornate pieces of Cameron Hill’s fine homes ended up in a home far from their origin, and at least one temporarily became part of a farmhouse.

Lynn Phillips Durham, who lives in an elderly neighborhood in Nashville, shortly after she was born moved to live far away on Cameron Hill.

It was a house on Arcadia Avenue that had been occupied for several years by the family of Morris Feld, owners of the Model Store. The Felds previously lived at 16 E. 4th St., then on the Cameron Hill side at 207 W. 6th St. Prior to this, the end house on Arcadia had been occupied by Benjamin H. Cox Jr., a traveling salesman. It was first occupied in 1913 by Henry R. Biedermann, who worked in the piano business. Later, Martin J. Burelbach, who was a scout director for the Boy Scouts of America, also lived there.

Mrs Durham said: “My paternal grandparents, Louie and Freida Phillips, lived at the end of Arcadia Drive. The house was on a dead end street and next to the many concrete steps with metal railings that ran up and down Cameron Hill.

“My grandfather, who was a clerk in the Postal Transportation Service, covered the red brick on the front porch with masonry brick which really added a lot to the look of the house.

“There was a two-bedroom apartment attached to the basement of the main house that you could see coming down those long steps at the side of the house. My grandfather’s brother, Abe Phillips, moved in there -down with his family for several years.

“When my dad, Martin “Marty” Phillips, came back from service, he, my mom, and “baby me” moved into the main house at 520 Arcadia. My paternal grandparents, Louie and Freida, moved into this apartment. under the main house (520 1/2 Arcadia) Uncle Abe and Aunt Bertha have moved into a house in North Chattanooga.

She says, “The view from the room my dad built at the back of the house was amazing at night because the walls in that room were mostly thick glass. It was as if we were looking at a gigantic Christmas tree.”

She noted: “My grandparents could enter and exit the main house through the basement. The basement door opened into the main house at the first floor hallway which led to my bedroom. parents and also in the kitchen. The fact that they would come into the house unannounced was a sore point for my mother.”

The Phillips family suffered tragedy while living in Cameron Hill. Her step brother, Richard Ivan”Ricky” Phillips, was bitten by a rabid cat and died when he was just 18 months old due to the experimental injections they gave him and Lynn (21 stomach injections ).

Lynn recalls, “I hid under my bed when we had to go get those vaccines. Dad had to take me out. They would have been extremely painful for adult men.”

This cat was a pet of one of the families that also lived on Arcadia.

Lynn says: “When my dad got wind of the demolition of Cameron Hill, he arranged a major buyout and moved our family to 44 acres where he took the red bricks from the Cameron Hill house to build a stable that could contain more than a dozen horses. They called this place “Red Acres” where they hired a riding instructor who gave riding lessons and took people around the park on trails. television, Bob Brandy, kept his horse in our stable.

“Red Acres was located at the edge of Chickamauga Park on Old Ringgold Road. There was a trailer park on the left that my parents also ran. The stable was on the right. Both are gone now.

The two-story colonial-style house is still there. Many changes have been made both inside and outside the house.

“My two younger sisters developed a strong love of horses during this time. Terre Phillips grew up with horses and had her own stable in Ringgold, Georgia (Peavine Creek Stables) for many years. Dayle Phillips Haywood and her husband have a miniature donkey farm with over 30 donkeys (Half Ass Acres in Chapel Hill, Tn.)

Lynn Phillips Durham also said: “It makes my little sister, Dayle Phillips Haworth, and I sad that we can’t go back and see the house we used to live in, the dead end we used to play in and all those many stairs to the right of our house.”