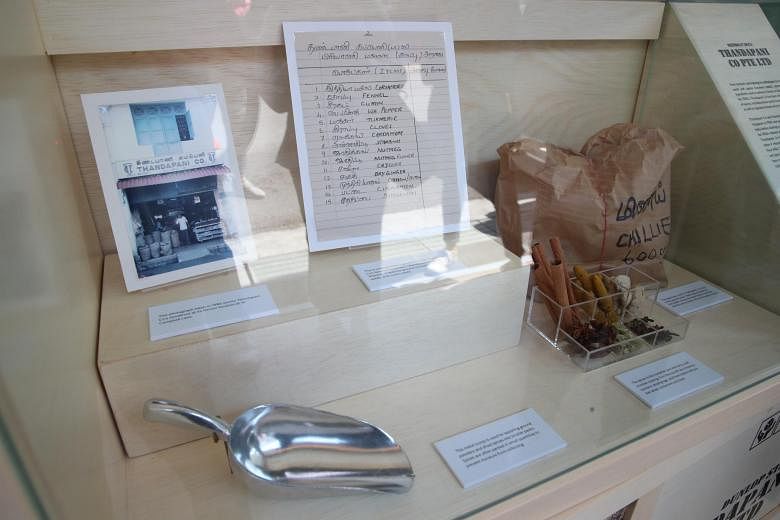 SINGAPORE – Madame Meena Gnanapandithan took over the business of supplying custom Indian spice blends from her father-in-law in 2005, but she is still reluctant to change anything in the shop more than a decade later.

“Everything around us is modern and new now, but here even the wooden baskets containing the spices are full of tradition and history. I don’t want to change anything,” the 45-year-old said.

The spice shop, Thandapani Co, is one of eight heritage businesses that will feature a mini-museum in a wooden cabinet to showcase the rich history behind their businesses.

The Street Corner Heritage Galleries are an initiative of the National Heritage Board (NHB) to encourage an appreciation of history and heritage in everyday spaces.

The first round of the initiative was launched in Balestier in March 2020, followed by the Kampong Gelam neighborhood in April 2021 which included seven businesses, such as Bhai Sarbat tea shop and Jamal Kazura Aromatics perfumery.

Thandapani Co was founded in the 1960s by Madame Meena’s father-in-law, Mr. Sanmugam, who came to Singapore from India in 1946.

Today, the shop offers spice blends and custom blends not only for members of the Indian community, but also for customers across the island.

“For our regulars and multi-generational customers, we know what taste their families prefer – how spicy they like their dishes, so we know the perfect proportions to serve them,” Ms. Meena said.

In addition to adding flavor to their customers’ personal kitchens, the shop also serves restaurants and chains, with curry puff chain Old Chang Kee among its past customers.

The store’s mini-museum features the raw form of common spices used in Indian cuisine, as well as a handwritten ingredient list for the store’s famous house blend, Thandapani Briyani Masala.

In another mini-museum opposite Jothi Store and Flower Shop, a one-stop shop in Campbell Lane that sells various goods like items needed for prayer and religious ceremonies, visitors will find betel leaves, colorful plastic bracelets and clay oil lamps.

Now occupying a five-story building, the store has seen vast changes over the years from the hole-in-the-wall store it once was in 1960.

Mr. Murugaia Ramachandra, 90, came to Singapore from India in 1948 and opened the shop after a stint as a composer at the Straits Times in the 1950s.

He expanded the store to include a flower shop after realizing there was a demand for flower garlands to be used in religious offerings at nearby Hindu temples.

How to Use Slack Channels – The Verge