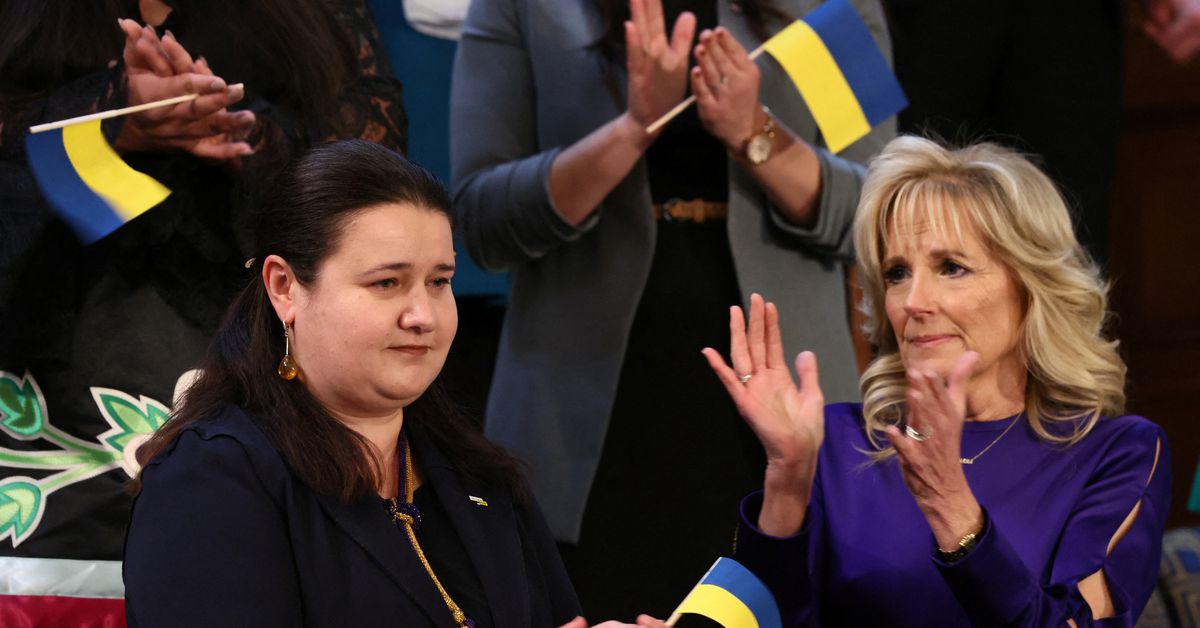 United States First Lady Jill Biden applauds her guest, Ukraine’s Ambassador to the United States, Oksana Markarova, in the first lady’s box, as President Joe Biden greets Markarova during her speech on the State of the Union during a joint session of the U.S. Congress in the chamber of the House of Representatives on Capitol Hill in Washington, U.S., March 1, 2022. REUTERS/Evelyn Hockstein/Pool

WASHINGTON, March 1 (Reuters) – As U.S. President Joe Biden spoke about the need to support Ukrainians in their fight against the Russian invasion of their country, lawmakers and officials also showed their support for Ukraine at through their clothing.

Dozens of lawmakers, including Democratic Congresswoman Lori Trahan and Republican Congresswoman Victoria Spartz, who is Ukrainian-American and born in Ukraine, attended the speech dressed in blue and yellow, the colors of the Ukrainian flag.

Jill Biden, the first lady, has also been involved in fashion diplomacy. She wore an embroidered applique of a sunflower, Ukraine’s national flower, on the sleeve of her dress as a sign of support for the country’s people, the White House said.

Energy Secretary Jennifer Granholm meanwhile said in a tweet that she was wearing a scarf – which also had blue and yellow elements – given to her last year by Ukraine’s foreign minister. .

Other lawmakers carried miniature Ukrainian flags, sometimes waving them to show support for the president’s remarks.

Even Iowa Gov. Kim Reynolds, who gave the Republican response to Biden’s speech outside his state’s Capitol, joined in the action, sporting a lapel pin that included the Ukrainian flag.

The speech itself was dominated by Russia’s invasion of Ukraine. Biden attacked Russian President Vladimir Putin, banned Russian flights from US airspace and led Democratic and Republican lawmakers in a rare show of unity. Read more

Fashion at the State of the Union has already caught the eye during a President’s annual address. In 2019, Democratic lawmakers wore white to celebrate 100 years of women’s suffrage in the United States.

First-term Republican lawmaker Lauren Boebert, dressed all in black, posted a different message with her clothes on Tuesday: “Drill Baby Drill” scrawled in gold on a black shawl, calling for increased energy production in the United States. United.