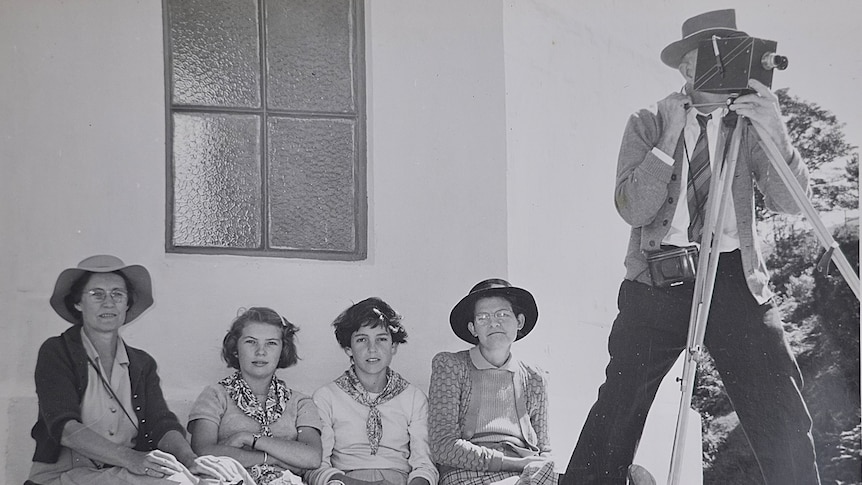 A historic treasure is discovered in long-forgotten film canisters in cupboards across Queensland.

Family members of deceased amateur filmmakers discover home movies dating back to the 1930s, which document life in the Sunshine State through the generations.

However, due to age, heat and humidity, the films are deteriorating at a rapid rate and the State Library of Queensland (SLQ) is in a race against time to save them.

SLQ staff digitize and store the best quality home movies given to them and share them online.

Serena Coates, head of preservation services at the SLQ, said “if we don’t do this work, we are at serious risk of losing the content of this material”.

“It’s crucial that this be done as soon as possible,” she said.

While some movies are approaching 100 years old, video cassettes that are only 20 or 30 years old are already deteriorating.

“The National Film and Sound Archive has set the year 2025, which is a critical year that we need to digitize magnetic media because we’re just going to suffer such a huge loss at that time,” Ms. Coates.

“Not only is that support deteriorating, but we’re also losing access to the equipment to be able to do this work.”

Reuben Hillier, a specialist librarian at the SLQ, said the films were “very strong in social history – what we wore, what we did, where we lived”.

“It’s changed a lot, especially in a city like Brisbane,” he said.

Moving images from decades past propel the viewer into a time warp – sending them on an exploratory journey of addictive viewing.

There are glittering scenes of a bustling Anzac Square in Brisbane’s CBD – before WWII.

Black and white images from 1939 reveal a time when City Hall dominated the skyline and the Story Bridge was about to meet in the middle on the Brisbane River.

Another film, 30 years later, shows the construction of the Captain Cook Bridge.

In 1954, there are crowds of people, dressed in gloves and hats, cheering and waving when they spot a young Queen Elizabeth in a passing motorcade.

While in 1969, discouraged faces peer through fences as a wrecking ball turns Brisbane’s original Tivoli Theater to rubble.

“It’s a glimpse of another era,” Mr. Hillier said.

“It shows how the landscape changes over time – buildings being demolished, buildings being built, highways, bridges – it’s kind of a candid view of the world, not very sophisticated, but it’s really very informative. “

In addition to important events and developments, perhaps the most gripping films are those that feature everyday life.

“Your average amateur film from this period – there are children in the garden, there are trips to the Gold Coast, vacations to the Sunshine Coast, street parades – everyone loved going to Warana and filming the passing chariots.”

There’s the Gayndah Orange Festival, the Warwick Rodeo, the peace parades at the end of WWII in Barcaldine and the Bundaberg Show.

Another reveals spectators crowding around a concrete slab in the suburbs that figure skaters had turned into a skating rink.

“People would love to do their own comedies and dramas…with their kids as the actors and their backyards as the setting,” Mr. Hillier said.

“They can be pretty crazy experimental movie types.”

There were also many trips to Ekka from Brisbane.

“No one ever tires of good Ekka pictures – it says a lot about how we celebrate and how we entertain ourselves,” Mr Hillier said.

A filmmaker in 1964 even added his own voiceover, describing the fairground scenes with a muted Australian-English accent.

“The first Monday was overcast and wet, but there was nothing damp about the shows or the excitement of the patrons,” the voiceover said.

Nancy Soden, 85, cannot remember a family event that was not filmed by her father, Len Pass.

“I think the family as a whole loved being part of a movie, which of course at the time was quite unique.”

Clips from the great-grandmother’s early years are liberally sprinkled throughout her father’s vast catalog of films.

There’s Nancy as a toddler in the 1930s, waking up at Christmas to find a new doll at the end of her bed.

There’s a teenage Nancy, in a bathing suit on the beach playing with her pet dog.

There’s Nancy as the bride, beaming in a long white veil as she descends the front stairs.

And there’s Nancy as a mother playing ring-a-rosie in the garden with her daughters.

“It’s nice to go through the movies and reminisce – it’s fun to look back at the fashions,” Ms Soden said.

Ms. Soden’s father was an electrical engineer, whose passion for cameras and creating images began when he was a schoolboy.

‘He loved anything different – he was quite artistic in his own way – an inventor, that’s how I would say,’ Ms Soden said.

An early board member of the Cine Society of Queensland, Mr Pass built most of its photographic equipment and even developed a machine for doing time-lapse photography.

“It was all built because during the war – you couldn’t buy any of it, so naturally the thing to do was make it yourself or go without – he was really a pioneer,” said Ms. Soden.

“As a growing child, I took it for granted that he would tinker, play and discover things.”

With sound and images now able to be broadcast worldwide in seconds, Mr Pass was involved in transmitting the first images of the former Tower Mill from Brisbane to Ipswich.

“He and this friend of his really started the start of the television industry,” Ms Soden said.

The SLQ is looking for more quality amateur films.

“There’s a chance there will be important images and we’re always interested in looking at new collections, but they should be assessed on their condition and content,” Hillier said.

“Some of them are a bit too blurry or there’s too much movement and they’re not something we can scan.

“Specifically, we want images of Queensland and Queensland families and especially those in the regions. We would generally avoid overseas holidays.”

And rather than being hidden away in air-conditioned storage, once digitized, old films will find new life.

“We’re not eliminating it – we’re constantly using film footage in our exhibits and presentations,” Hillier said.

“We use a lot of our film footage on our social media or at a show, like the Ekka, to highlight the story of this event.”

In the SLQ’s preservation laboratories, the digitization process continues every day.

There is a backlog of 10,000 items to digitize and it is a slow process, with each record having to be cleaned up first.

Experts shoot each film by hand, using an eyepiece to check individual frames for mold, before the item is ready for scanning.

Information on how to keep your own film, video and audio recordings can be found on the SLQ website.

Ms Coates said it was recommended to create and store multiple copies on personal computers, the cloud and external hard drives.

“If you can store any on an external drive, give them to your neighbor so they have a copy so that if the worst happens and you have some kind of disaster at home, you have a backup copy. “said Ms Coates. .

“You can digitize something, you can keep it and do your best to make sure it’s around for as long as possible, but you can never say forever.”