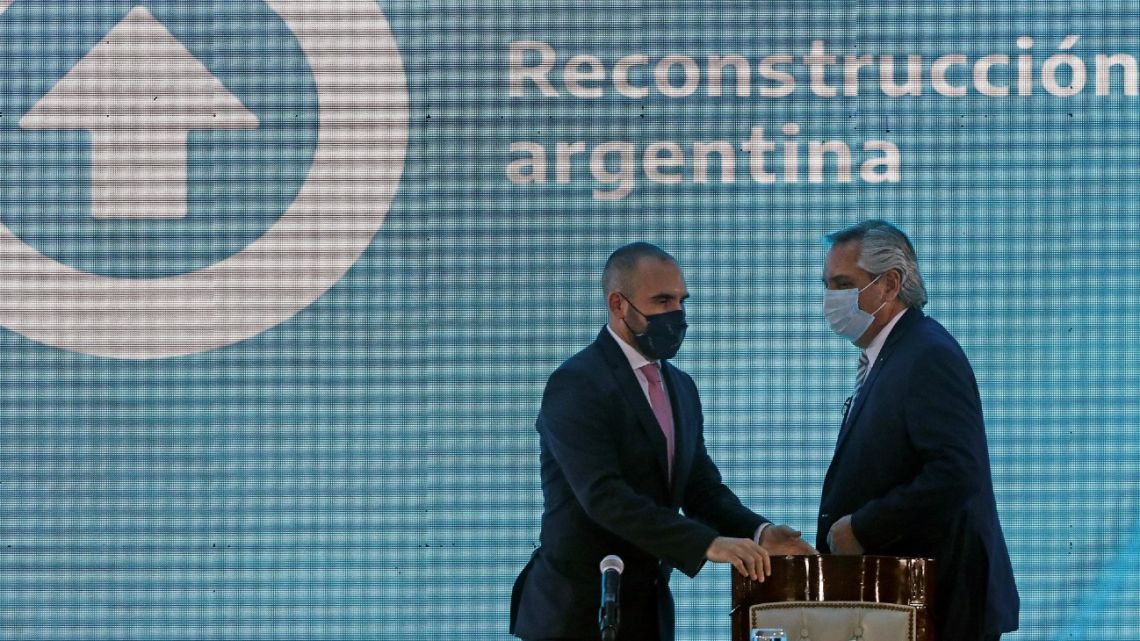 While Argentina and the IMF are “on the same page” on the level of foreign exchange reserves needed to support the country, they disagree on how quickly the government should reduce its budget deficit, said Guzmán on Wednesday as he presented his most detailed vision to date for negotiations with the Fund.

The IMF’s proposal “would likely put an end to Argentina’s economic recovery and is essentially a program of real spending cuts,” the minister said during a presentation to governors in Buenos Aires, alongside President Alberto Fernández.

Guzmán’s firm stance comes at a critical juncture in negotiations with the Fund. After two years without concrete progress, Argentina has large payments owed to the IMF this year and Fernández has already said the government cannot pay.

“Argentina’s leaders’ press conference on Wednesday looked like an attempt to buy time and convince the markets, the International Monetary Fund or the government itself that time and negotiating power are on the country’s side. The tone of President Alberto Fernández and Economy Minister Martín Guzmán suggests that no deal is imminent, ”said Adriana Dupita, Latin America economist at Bloomberg.

Without naming a country, Guzmán admitted that Argentina did not have sufficient international support for the IMF to reach a deal.

“What we have is the support of part of the international community, but not all,” he said. “This is the reason why there is no agreement yet on this fundamental point of the tax question.”

Guzmán detailed the technical stages of the negotiations in a series of charts showing projections based on Argentina’s proposal for the primary budget deficit, monetary financing and international reserves. He said Argentina and the IMF agree that central bank reserves should increase between US $ 3 billion and US $ 4 billion per year. However, Guzmán did not provide specific figures on the budget deficit or monetary financing.

Argentina owes the IMF $ 2.8 billion in March, a payment many analysts see as a deadline to reach a deal given the central bank’s meager reserves. Some economists became more pessimistic about the deadline after watching Guzmán on Wednesday, noting that he made no mention of the improving business climate in Argentina.

“The odds are growing with each passing day that they won’t have a deal by the time the March payment comes due,” said Arturo Porzecanski, professor of economics at the American University in Washington. “The impression I have is that the negotiations are blocked because the Fund is looking for a greater budgetary effort.”

The presentation itself sparked controversy before it began. Opposition leaders did not attend, calling the forum a “political meeting” which should not be held in the presidential palace, but rather in the Legislative Assembly. The lack of participation from the opposition bloc does not bode well as the IMF said in December that the future program needed “broad support” in Argentina.

The debt stems from a record bailout the Fund granted to Argentina’s previous government in 2018, which failed to stabilize the economy. Guzmán referred to the recent assessment of this program by the IMF and criticized the institution for focusing too much on restoring market confidence and not on the real economy.

In the 2018 agreement, “the focus was on restoring market confidence,” he said. “Of course, we are working to create more confidence in the markets, but the first thing above all is to improve the situation of the real economy.”

Do you dare to take a look at the 9 craziest real estate photos of 2021?