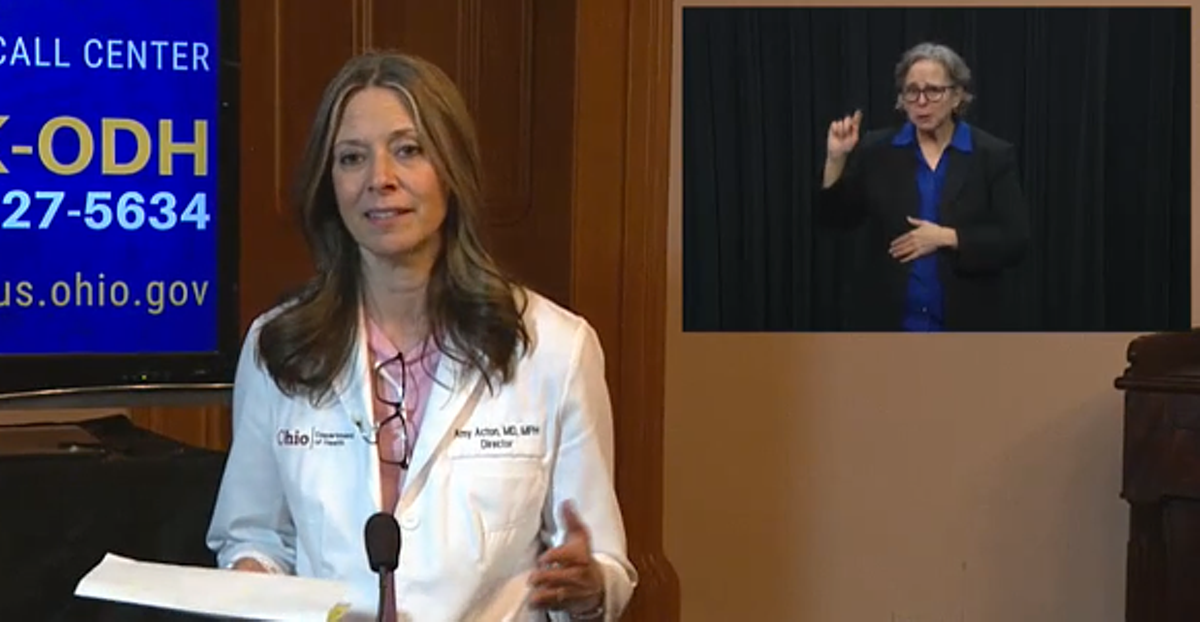 A hospital in Columbus.

Paging Dr. Amy Acton. To help! We are rudderless and tottering. Our health care system is collapsing. Hospitals are short of beds. COVID-19 positivity rates and hospitalizations are skyrocketing. Children in hospital outnumber adults. Mainly in five states. Ohio is one of them.

With only half of the state fully vaccinated, the even more infectious virus is ravaging the unvaccinated population with vengeance. We are now at more than 29,000 total deaths from COVID and we are bracing for a brutal January. Ohio is struggling with a “code blue” medical emergency. The patient is critical. But the rapid response team got trapped. Through politics.

How far we’ve fallen from the stubborn, science-driven approach that has quickly brought the severity of epidemics under control – until now. Today, a state once praised nationally for its cautious and preventative shutdowns that succeeded in easing the toll of the Ohio pandemic, is cited as a shining example of dismal public health failure. It is among the first states to lower full vaccination rates. It recently recorded the highest number of hospitalizations for COVID, adjusted for population, of any state in the country.

A few days ago, it recorded the highest day of new infections since the pandemic began almost two years ago – and the worst is yet to come. As of this writing, Ohio’s positivity rate, in terms of testing, is over 30%, making it one of the first two states to get out of hand with COVID cases in the United States. United

Dr Amy Acton during a COVID press briefing in March 2020

Dr Acton must shake his head.

At the onset of the pandemic, the public health expert led the state’s emergency triage with unwavering determination shrouded in a reassuring embrace. She gave it to us directly. The situation was bad. We had to seize the opportunity as citizens to overcome our collective trauma. She would be there with us, keeping a close eye on the patient, following the data, encouraging persistence in trials.

But that unifying snapshot of Ohio’s strength quickly faded when angered politicians complained about taking over a doctor, and a woman no less. She was not their boss. In melodramatic legislation, akin to the slamming of teenage doors, state lawmakers have declared themselves responsible for public health emergencies – qualified as they were to triage catastrophic medical events. The MAGA crowd has also cut the wings of the executive, just in case the governor has any ideas on how to run the state in a full-blown crisis.

Gov. Mike DeWine, who has never been a brave profile, has refused to push back the rightists who have taken the lead with his administration. He could have challenged their unconstitutional seizure of his authority, but winning a second term took precedence over taking a stand in the public interest. He chose to accept the MAGA cult for his own career and never looked back. Rather than being overshadowed by fellow Republicans, DeWine quickly ditched mask warrants, social distancing, and other restrictions before his own standards to do so safely.

Instead of leading the pandemic, DeWine has apologized. He did not mandate proven tools to curb COVID outbreaks because there was no “appetite” for them. His hands were bound by the law. It was the legislator’s fault. They would cancel it. He was counting on the “goodwill of the people” to follow the facts. He would recommend public health protections during a raging pandemic, but not demand compliance (for the greater good) of any of them. Not if he wanted to be reelected.

As the Omicron variant fills Ohio hospitals to breaking point with mostly unvaccinated patients, we expect DeWine to do something besides supporting besieged medical facilities with increased staffing. Sending thousands of National Guard troops to hospitals may temporarily keep medical centers understaffed, but what is the state doing to flatten the upward curve of incoming COVID patients? Other life-threatening emergencies, heart attacks, strokes, accidents, and more, also depend on more than deployments.

At a recent press conference, DeWine spoke as a male candidate for re-election and not as a leader doing what needs to be done to prevent a train crash from happening in the coming weeks. Immunization rates have barely budged in Ohio. To urge people to “think about getting it” (vaccines) while acknowledging anti-vaccines with “it’s your choice” is to reduce the urgency to act now. Urging schools to force masks as thousands of children file themselves into poorly ventilated buildings is a DeWine escape route when the crisis calls for an immediate statewide mandate. Many districts would welcome the order. But he will not give it.

When the Governor stood next to Dr Acton in March 2020, he did what needed to be done, whether it was popular or not. She immediately stepped into the yard with some tough decisions that saved lives. The former Ohio health director has been ruthlessly kicked out of her job for putting the patient first. Sadly, DeWine prioritized keeping her job and let what should have been a statistical response to impending disaster become a recommendation – lest anyone be offended.

This story was originally published by the Ohio Capital Newspaper and republished here with permission.

Sign up for our weekly newsletters to get the latest news, things to do and places to eat straight to your inbox.