Glasgow Chess Makers: Our Next Move is Edinburgh and Beyond

IT began as a tribute to their hometown and saw some of Glasgow’s most famous landmarks replicated in chess pieces.

Now they are ready to take their next step as they expand their chess-themed business nationwide with sets representing other Scottish and UK towns.

Read more: The architect behind the redesign of the Burrell Collection says it opened up the heart of the building

The duo have designed a durable chess set with all the figures representing iconic Glasgow landmarks. The Clydeside Chess Set features the Duke of Wellington on his horse with the trademark cone as a knight; the pawns are represented by the armadillo and the Finnieston crane is the rook.

Demand for their premium product is booming and now they are ready to replicate their success with new releases for other cities.

Clydeside Chess idea will be replicated in other UK cities

Each piece was designed and manufactured by the duo using CAD software and a 3D printer. They are printed using an eco-friendly resin produced from soybeans so they are durable and compostable when no longer needed.

The friends, who set up a company called 3D Scotland, began selling the chess sets at Scottish Design Exchange stores in Glasgow and Edinburgh. SDX provides street presence to hundreds of independent artists and artisans.

Mr O’Donnell, 24, said: ‘Alex and I were together at university where we became best friends. We felt that global cities like New York and London were getting all the love from the world of design and cultural promotion and that our hometown of Glasgow was not represented at all.

“We wanted to pay homage to our hometown and show the world what a wonderful place Glasgow is to live and work. In addition to using the skills we were learning in college, we also wanted to do something enjoyable as a hobby.

We were both studying product design at Glasgow School of Art and the University of Glasgow. In order to show Glasgow some love, we decided to design a chess set with each of the pieces represented by an iconic Glasgow landmark.

“Thus the king is represented by the main building of the University of Glasgow, the Rook by the Finnieston Crane and the pawns by the Armadillo. We both went to see Limmy at the Armadillo and felt we couldn’t leave him out. 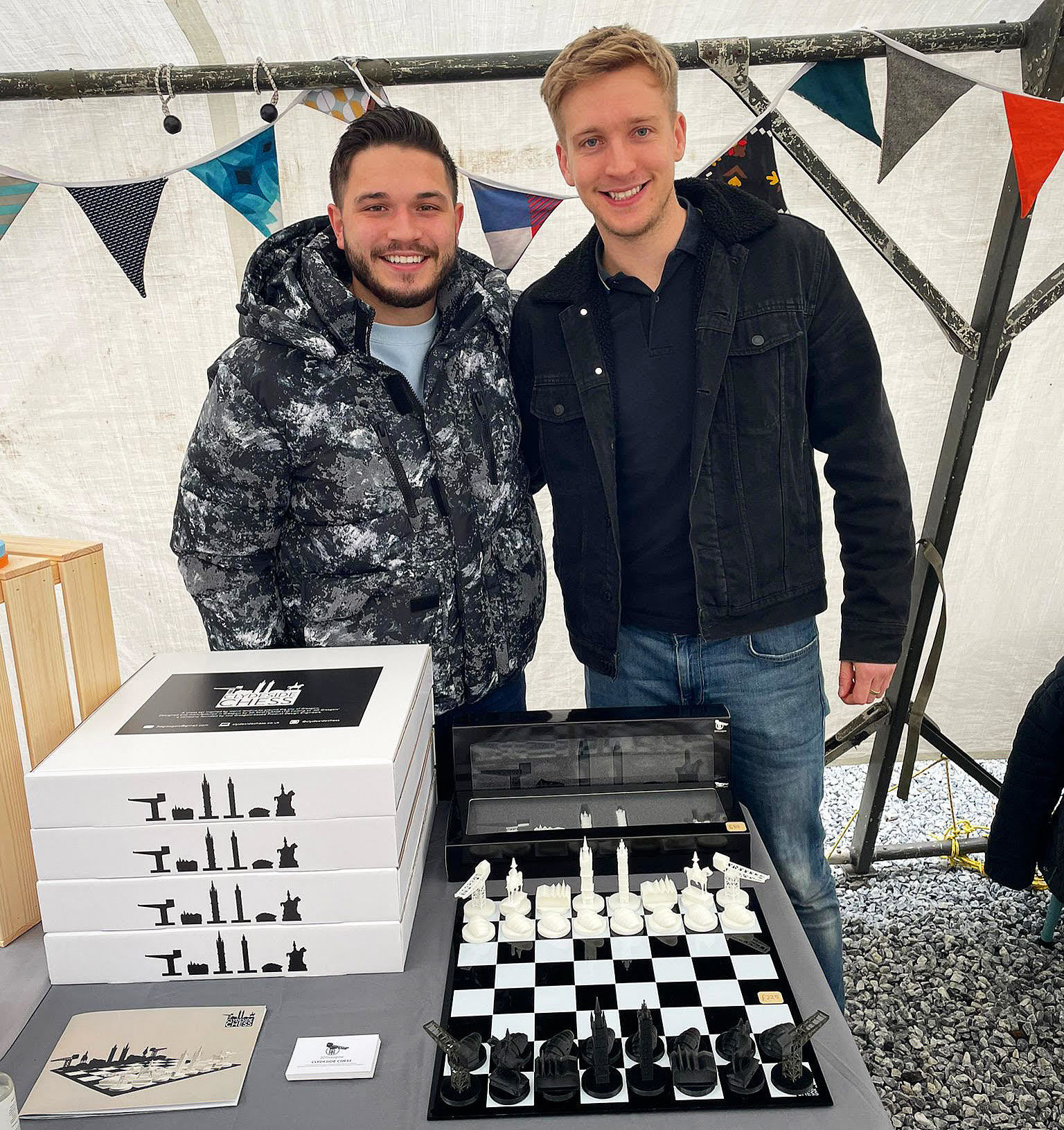 The sets, which come in a specially designed presentation box and come with a brochure explaining the background to how they were made, sell for £225. Individual pieces are also sold in bespoke gift boxes.

Sets are produced in black and white and bespoke color versions can be produced to order. There is a green and blue set for players who, like Alex and Michael, are rival Old Firm fans.

Mr Duff, 25, said: ‘We have been pleasantly surprised by the strong demand for the products, most of which are bought as gifts for people who live in Glasgow or who have moved but retain ties to the city.

“Our plan is to produce sets that pay homage to other cities that are not getting the attention they deserve, starting with Edinburgh and we are currently in the process of shortlisting monuments to represent the pieces.

“We will then move on to Aberdeen and Dundee, as well as a pan-Scottish plateau, before moving on to cities in England, starting with Newcastle and Manchester.” 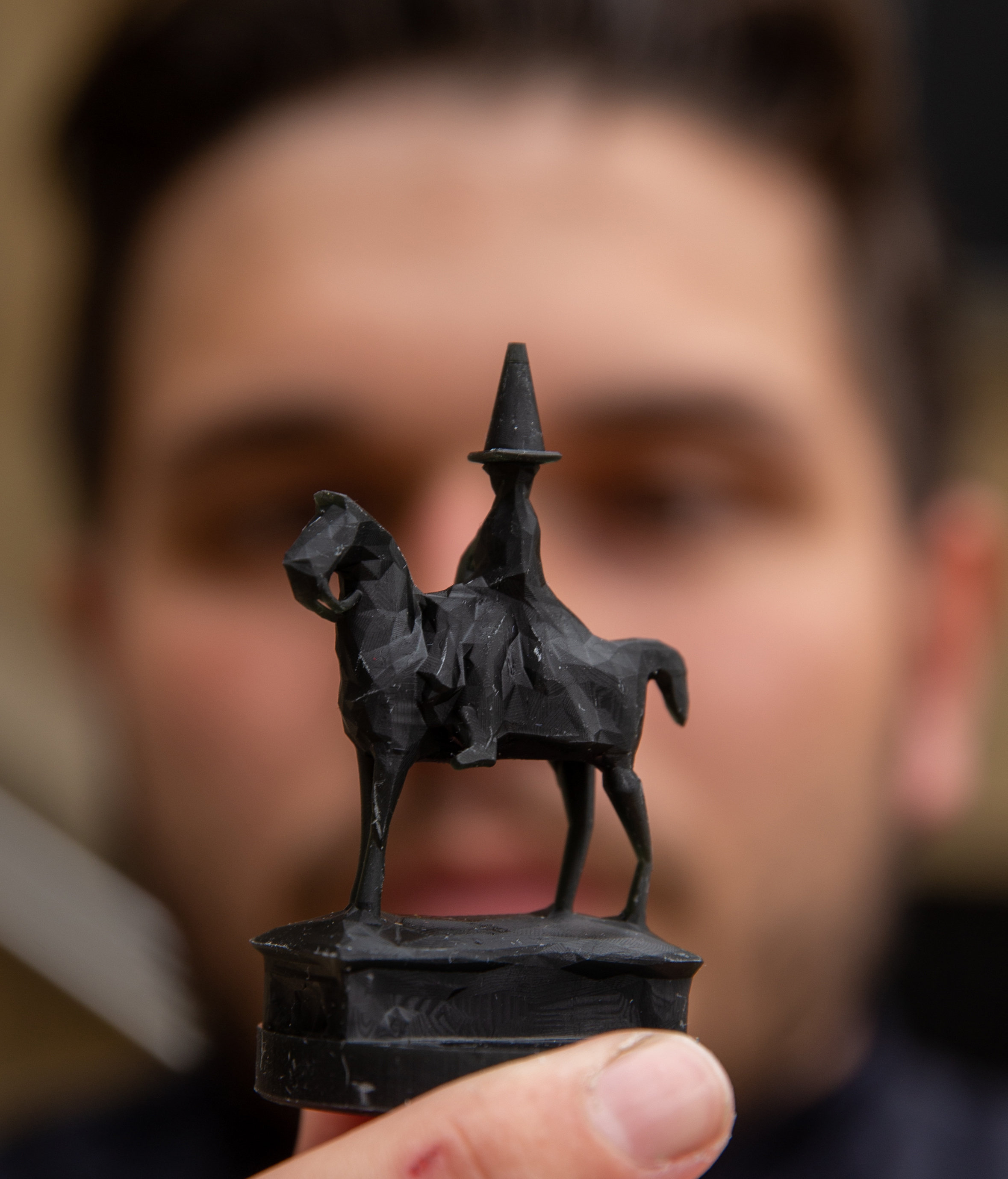 The pair are now hard at work fulfilling orders and, with each set taking around 36 hours, they plan to invest in new premises and equipment.

“An incredible amount of detail goes into creating the pieces to make them proper reproductions rather than just rough copies,” O’Donnell added.

“We take our own photos of each structure and study it in detail before the process of designing a replica begins and the printer is accurate to within five microns.

“So if you look at the Finnieston Crane, for example, the chess piece even has the Clydeport sign on the side.

“We want to make premium products that stand the test of time. Each piece is individually finished and polished so they look clean and sleek and there are detailed instructions on how to care for them to ensure they last a lifetime.

Tales and Miraculous Toys • The Book of Toys