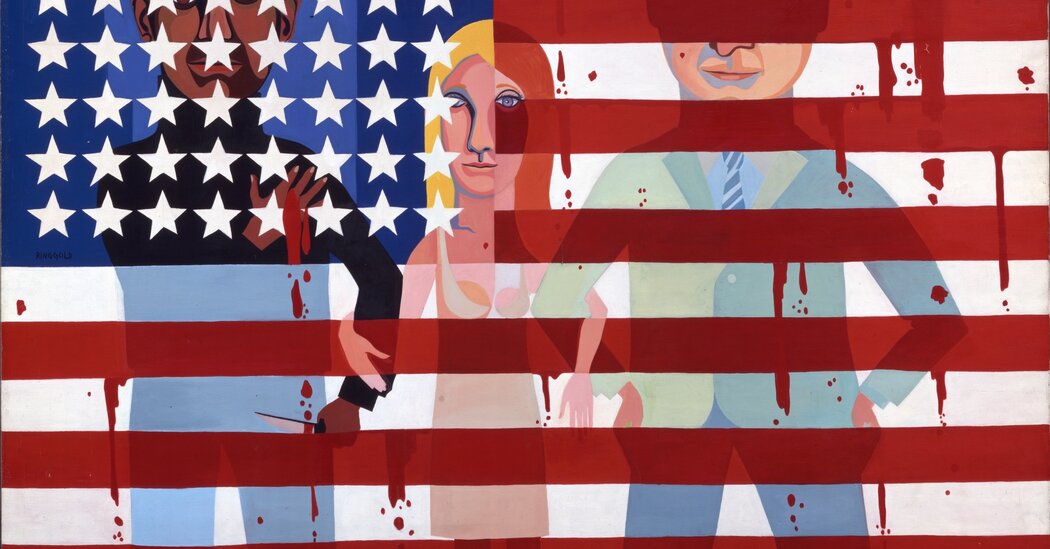 If you want to catch the heat of the lava flow that was America’s racial politics in the 1960s, the second floor of the New Museum in Manhattan is a good place to go. Here you’ll find early works from “Faith Ringgold: American People,” the Harlem-born artist’s first local retrospective in nearly 40 years.

Now 91, Ringgold was already a committed painter when the Black Power movement broke out. And she had a personal investment in the questions it raised: not just how to survive as a black person in a racist white world, but how as a woman to thrive in any world.

As an ambitious artist, she seems to have made strategic decisions to move forward. One had to produce constantly, no matter what. Another was to seek support within a black matriarchy of family and friends. A third decision – the most difficult – was to carve out a career path of maximum resistance. To that end, she pursued figure painting, worked with fabric art, and focused on narrative content at a time when the mainstream art market wanted nothing to do with any of these elements.

This retrospective, which occupies three floors of the New Museum, combines figures, craft techniques and narration in inventive combinations. And it’s clear that what relegated Ringgold to an outlier half a century ago puts it front and center now. It speaks volumes of strong art and changing tastes that his 1967 mural “American People Series #20: Die,” an explosive scene of blood-splattered biracial carnage, was a star attraction at the Museum’s much-watched of Modern Art. Resumption of the permanent collection 2019.

Joining the business and creating art came early to Ringgold. As a child, she was often housebound with asthma. To keep him busy, his mother, Willi Posey, a seamstress and clothing designer, provided him with art materials. Creativity got stuck. In 1950, she enrolled in art classes at the City College of New York. She also married and had, in quick succession, two daughters, one of whom, Michele Wallace, is now a renowned art historian and contributor to Ringgold on activist projects.

Marriage has come and gone. What lingered was Ringgold’s interest in art. After earning a graduate degree, she accepted a job teaching at a public school. There, one of his pupils was the younger sister of James Baldwin, whose writings helped transform Ringgold’s painting – mostly Impressionist landscapes of the 1950s – into a political direction.

The retrospective — curated by New Museum Artistic Director Massimiliano Gioni, Curator Gary Carrion-Murayari, and Assistant Curator Madeline Weisburg — begins at this pivotal moment with a group of brooding, broadly drawn figure paintings called the “American People Series.” In one, dated 1963, a row of light-skinned male figures face outward, a wall of wickedness with blank eyes. In another, called “The Civil Rights Triangle”, four of the five men depicted are dark-skinned, but a fifth light-skinned man towers over them. All the images speak of hierarchies of power; women are barely present. Ringgold called this wary early work “super realistic”.

At this point, she approached members of New York’s black male art establishment – ​​Romare Bearden, Hale Woodruff – for professional help, but was turned down with what sounded like a pat on the head. She must have realized that she was, professionally, alone, and perhaps that further softened her art.

In the late 1960s and early 1970s – years marked by police killings of black activists across the country – his paintings suddenly became big, loud and crazy. (MoMA’s “Die” comes from this era, as does a related image, “The Bleeding Flag,” both done at wall scale to relate them to Picasso’s “Guernica” and Mexican murals of the past.

“I just wanted to give a sense of what America is,” Ringgold said of this work, in the catalog interview with Gioni. “You notice there is no black woman in the photo. The white woman was trying to bring the black and white man together because she really had no power, and the only way to acquire it was to bring men together. Black women were literally irrelevant, period. It took decades before people realized we existed.

Other paintings from the time become almost silent. For a group called the “Black Light Series,” Ringgold eliminated white paint entirely from its palette and darkened its colors with black. Faces and bodies seem to float out of reach, submerged, almost invisible.

His political commitments in general have widened. As a co-organizer of an anti-Vietnam War exhibit, she was charged with desecrating the United States flag and arrested. (The charge was dropped.) She designed posters protesting the imprisonment of Angela Davis and the murder of prisoners in Attica. She joined Michele Wallace in picketing the Whitney Museum of American Art for its exclusion of black female artists.

Her relationship with the predominantly white feminist movement was reserved, but not with feminism itself. A bold statement of her allegiance came in the form of a mural-style painting she made for the Rikers Island Women’s Correctional Institute in 1971.

Long stored on Rikers and now, at the request of Ringgold, on long-term loan from the city to the Brooklyn Museum, the work is on display. Using bright colors and a compartmentalized design based on African textiles, it depicts women of different ages and ethnicities engaged in a range of professions – doctor, athlete, bus driver, President of the United States – as prisoners , if they had the possibility and the resources, could exercise once in the world. Before getting to work on the piece, Ringgold invited all women at Rikers to come up with ideas for it. And she quietly included herself in the picture. (You see her in profile at the bottom right of the photo)

Working with women has always featured in his art, beginning with the contributions of his fashion designer mother, Willi Posey.

They first worked together in the early 1970s on the “Feminist Series”, a group of paintings with fabric frames modeled on those of Tibetan thangkas and sewn by her mother. Posey also worked on a group of African-inspired, life-size fabric figures worn by Ringgold during performances or presented as tableaux of soft sculpture, such as the massive 1976 multi-part work “The Awakening and Resurrection of the bicentenary negro”, installed on the museum. third floor.

Finally, in 1980, Posey sewed Ringgold’s first painted quilt, “Echoes of Harlem”, helping to create the prototype for what was to become the artist’s most familiar artistic medium. After her mother’s death the following year, Ringgold paid tribute with “Mother’s Quilt”, a quilt adorned with black doll-like figures, like angels, made from scraps of fabric the women kept for use. future.

An elaboration of the painted quilt form, called “story quilts”, caught Ringgold’s attention both inside and outside the art world. Vehicles of personal narratives, often annotated with stitched text panels, some of these hangings are diaries, as in the case of “Change: Faith Ringgold’s Over 100 Pound Weight Loss Performance Story Quilt,” from 1991. Most combine fiction and autobiography.

The best known of these is the unique “Tar Beach” quilt, which illustrates Ringgold’s childhood memory of picnics one summer night on a Harlem rooftop with the George Washington Bridge shining in the distance. From the quilt, Ringgold derived a series of designs, which in 1991 appeared as a widely acclaimed children’s book, the first of many Ringgold has made. (You can browse them all in an exhibit reading room on the 7th floor of the museum.)

The quilt form is also the vehicle for Ringgold’s most formally intricate and dynamic painting project, “The French Connection”, which unfolds in 12 royal-scale hangings, like chapters, on the midnight blue walls of the 4th floor of the museum. It chronicles the experience of a single main character, a young African-American painter named Willia Marie Simone, who first came to Europe in the 1920s with her two young children, to immerse herself in European art. – a journey which, as it happens, Ringgold herself did in 1961 for the same reason, and with her mother and daughters in tow.

Once installed, Simone is everywhere, meets everyone. She poses for Matisse. She spends time in Gertrude Stein’s living room. She joins fellow time-travelers – Sojourner Truth, Harriet Tubman, Rosa Parks – to embroider a sunflower quilt in Van Gogh’s Arles. Finally, back in Paris, she paints a completely feminine Luncheon on the Grass, in which all the picnickers are Ringgold’s family and friends. In fact, there is a man in this scene, Pablo Picasso, posing skinny and naked on a towel on the grass. No one seems to notice.

Overall, “The French Collection” seems, in tone, far removed from the dark, overpowering “American People” imagery of the 1960s (and the chilling, apocalyptic “We Came to America” ​​imagery – it is in the series – which Ringgold paints just after the 12-part series ends). But there is also politics at work in French paintings, embodied in the guiding black female presence of the cosmopolitan Willia Marie Simone, who is, of course, a version of Ringgold herself.

Half a century ago, a presence like his had to fight to exist in the world of traditional art. Look around you now, and you see it, not everywhere yet, but more and more. Faith Ringgold, artist-agitator-psychic, can be thanked for that.

Funko Games has unveiled new games for little ones inspired by Dr. Seuss and CoComelon