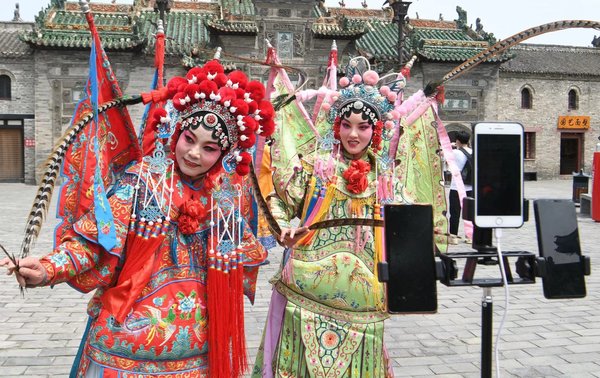 
Activities such as watching performances and concerts online, visiting virtual exhibitions, and watching traditional Chinese opera performances via smartphone apps are increasing with the rapid development of digital culture.

The China National Center for the Performing Arts (NCPA) in Beijing offers online performances every Saturday night, with performances including the Peking Opera work “Suo Lin Nang” (The Jewelery Exchange), the conductor -work of the modern drama “A doll’s house”, and well -known opera “The Marriage of Figaro”.

Since the NCPA launched the first online performance on April 11, 2020, it has staged more than 120 online performances covering various types of performing arts, such as concert, opera, dance, modern theater and traditional Chinese opera. These online shows have been viewed more than 3.4 billion times in total.

On August 8, 2020, the NCPA live-streamed the world’s first online concert with 8K resolution and 5G network technologies for global audiences. Audiences could even clearly see the wisps of hair and beads of sweat on the performers’ faces during the live concert presented in 8K ultra-high definition (UHD) resolution.

The NCPA Classical Music Channel has continuously improved its audio and visual technologies and added the options of “immersive headphones” and “immersive sound box” to create virtual panoramic sound effects of fantastic audio and visual experience for the audience.

China’s Yangzhou Grand Canal Museum, located in the city of east China’s Jiangsu Province, posted videos on its account on WeChat Channels, WeChat’s video-sharing portal, to show netizens its collections and exhibitions. Thanks to these short videos, museum enthusiasts can “visit” the museum when and where they want via their mobile phone.


Zhou Fang, a citizen who works in Nanjing in Jiangsu, the neighboring city of Yangzhou, is one of the followers of the story. She watched short videos of a special exhibition featuring the ancient capital of the Tang Dynasty (618-907), the city of Luoyang, now located in central China’s Henan Province, held by the museum.

“Each episode of this short video series is only a few minutes long. Focusing on the theme, they tell stories about cultural relics in Luoyang and show viewers how they were unearthed, transported to Yangzhou, packed and organized for exhibition. There are also vlogs about offline tours of the exhibition,” Zhou said.

Statistics showed that the museum has posted nearly 20 episodes of the exhibit on platforms such as WeChat Channels, Chinese social media platform Weibo and popular short-video sharing platform Douyin since March. More than eight million people have “visited” the exhibition via these videos.

Online exhibits are supplements and recreations of offline viewing, said Zheng Jing, curator of the museum.

In order to launch good online exhibits, the museum should carefully design online tour routes and provide knowledge about culture and history, according to Zheng, who added that the museum is also adopting digital ways to tell stories. about cultural relics in a vivid way and deepen the interactions between people and exhibits.

The emergence of increasingly innovative forms of cultural consumption, which are no longer confined to offline scenes, has freed people from the constraints of time, space and cost to enjoy culture.


Works uploaded include “The Legend of the White Serpent” performed by Wu opera masters which won the Chinese Drama Plum Blossom Award, the country’s highest theatrical honor, “Three Drops of Blood”, a work well known from the Qin opera. which has a history of more than 100 years, and “Oedipus”, an art of Pu opera adapted from the classical tragedy of ancient Greece “Oedipus Rex”.

Without leaving home, app users can watch a video recording of an opera performance for 6.6 yuan (about $0.99) or enjoy a live performance of traditional Chinese operas for 9 .9 yuan (about $1.48). Some well-received operas online are also staged offline.

As the digital infrastructure improves more and more, the burgeoning digital culture will facilitate the inheritance and promotion of excellent traditional Chinese culture, according to Wei Pengju, director of the Cultural Economics Research Institute of China. the Central University of Finance and Economics.