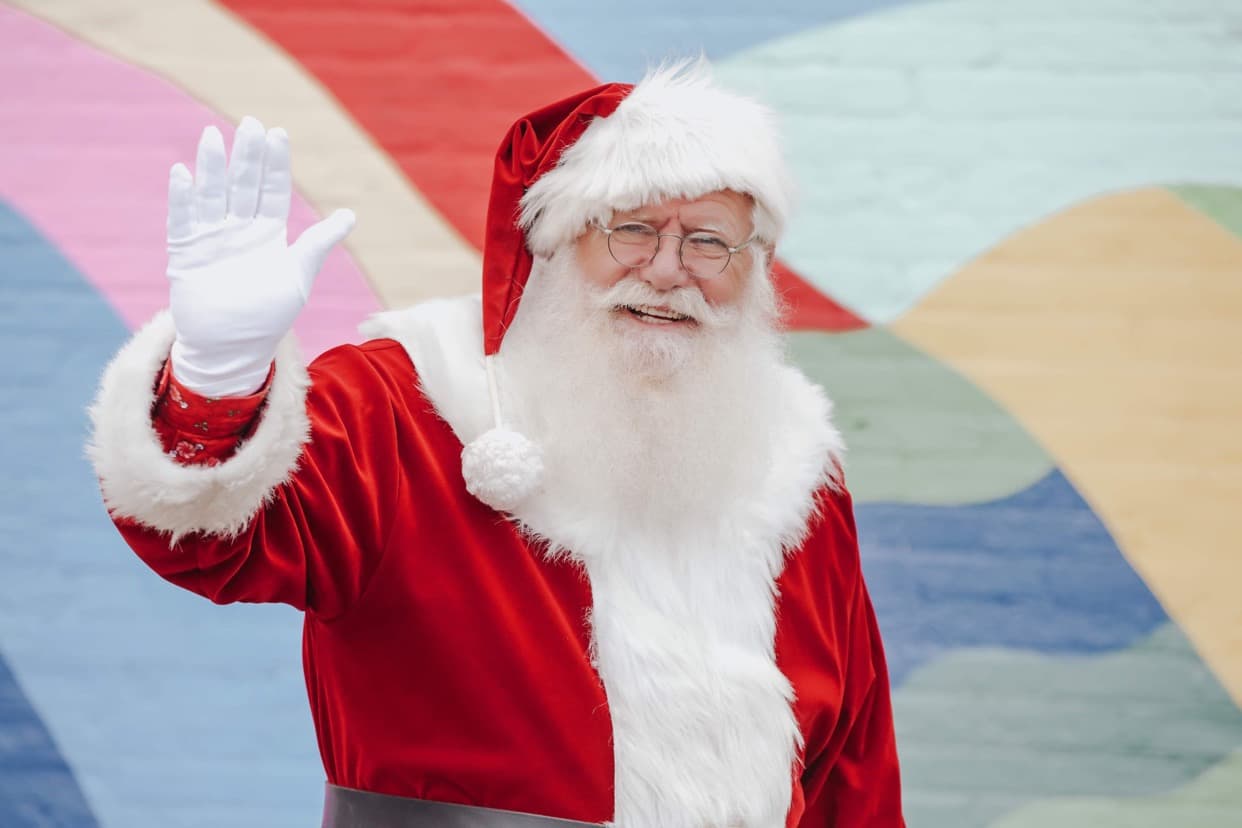 Larry Jones got a call from his stepfather with a weird suggestion based on one thing: Jones’ beard.

“He had seen an ad in a Tampa newspaper for a company looking for real bearded men to play Santa,” Jones, of Beaverton, said. “So he wrote down the number, called me and said, ‘Call this number,’ because I had a full beard.”

Jones, 70, has been playing the role of a mall Santa for over a decade now, with his skills taking him this year to one of the most important places he could play the main holiday character: Macy’s in Chicago. Playing the role has not only impacted his holiday schedule each year, but also how he views the legend of Santa Claus himself.

Growing up on a farm between Linwood and Pinconning, Jones loved Christmas growing up, like any child would. However, Santa was not an ubiquitous part of his memories with the holidays, let alone the sight of his grandparent and the anticipation of opening presents.

After graduating from John Glenn High School, Jones entered the military, where he remained for approximately 21 years. He retired as a staff sergeant, working as a combat engineer.

After military life, Jones transitioned into civilian life as an employee at Dow Corning, running his own construction company and driving tractor-trailers.

When Jones responded to the ad sent to him by his stepfather, he drove to Kalamazoo for the interview. He spoke with a woman from a photography company that employs real bearded men as Christmas figures, who asked Jones what he wanted her to know about himself.

For him, being a Christian Santa means reminding people why Christmas is celebrated in the first place, if the occasion arises. For example, if a child mentions that it’s Jesus’ birthday, Jones will start beaming and ask if the child has ever said happy birthday to him. But his role is above all to play the merry Santa Claus for the children who come to visit him.

His first time playing Santa Claus was at the Lakeside Mall in Sterling Heights. The vacation also took him to malls just outside of metropolitan areas like Boston and Chicago.

The most important part of looking like the titular holiday character is maintaining his beard – which he spends a year growing after a fresh shave after the holidays. Jones’ beard must be styled throughout the year, then bleached just before he steps into the role for a season. Maureen Vanderberg, a Bay City resident and friend of his wife, grooms his beard about every eight weeks.

When styling the beard, she should keep it rounded and sculpt it around the cheekbones to give Jones his cheerful look.

In order to better connect with children, Jones asks department store employees what they think will be the hottest toys during the Christmas season. So if a child asks him about a dollhouse, for example, he might respond with, “You mean the one with a moving elevator? »

He must also be prepared for the difficult demands of the children who see him. Children have asked Jones to bring their deceased parents back or reunite their estranged parents. In these cases, Jones said it was important not to make any promises and tell them that their guardians would take good care of them.

One child, however, stands out from Jones after all these years of playing Santa Claus. Jones remembers that one year a child of about six or seven years old came with his grandparents. As the child, Will, told Jones what he wanted for Christmas, Jones noticed the grandfather bawling to the side.

When Will was done with Santa, Jones asked Grandpa what was wrong. Grandpa said Will had a brain tumor and it was probably his last Christmas. Instinctively, Jones ran after Will and said, “I really hope to see you next Christmas. I will look for you whenever a family comes to see me.

Will was happy and receptive, but Jones had to turn away to hide his own tears.

“I will never forget it,” Jones said. “If I write a book, there will be a whole chapter on little Will.”

One group of kids that Jones has a soft spot for are people with disabilities. Renee Lenn, who ran Jones at Lakeside Mall, said he always made time for children with disabilities and genuinely wanted to learn more about them.

Jones recalled a child who came over a year old and asked Jones for a strange request: a friend. Perplexed, he asked the kid if he had any friends and he said no. Jones replied, “I’ll be your friend for as long as I can.”

Jones later learned from the mother that the child had Asperger’s Syndrome, making him a target of bullying and struggling to make friends. Jones was then able to get in touch with the child and they maintained a pen pal relationship for several years afterwards.

Jones’ talent for playing Santa Claus led him to Macy’s this year, adding that Chicago Macy’s is one of the best places a Santa like him can go. While he was excited, he had apprehensions about his new role. At Macy’s, he won’t be in an open mall with kids on his lap like he’s used to. Instead, he will have a makeshift “Santa’s office” and visits will be by appointment behind the desk.

This year will be a trial for Jones to see if he wants to continue working in this setup in the future. However, he said working there so far has been a once-in-a-lifetime opportunity and it certainly comes with bragging rights in Santa’s world.

After playing Santa Claus for about a decade, Jones said he learned the kind of joy he could bring to children.

“You give them some hope that there really is beauty in this world today,” Jones said. “If I can take the pain away from people for five minutes and minutes in today’s crazy world, then I’ve done a good job.”