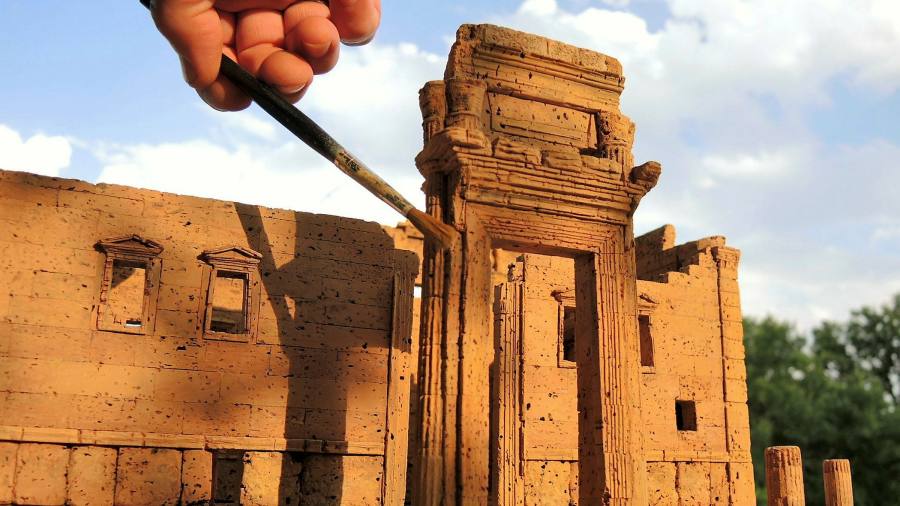 Architectural models: an art in its own right?

When the Empress Joséphine asked the architect Pierre-François-Léonard Fontaine to remodel her room at the Château de Fontainebleau, she naturally wished to consult her husband Napoleon. But he was absent from the battlefield. So the architect made a model of a foldable folding map to illustrate the three-dimensional drawing and sent it to the emperor. As you embarked on his new series of wars, you would have thought he had better things to do but, nonetheless, the famous micromanager was able to give his assent.

Architectural models inhabit a domain between the technical and the popular; they can transcend the mere projection of drawings and become things in their own right, embodying remarkable stories beyond the building they represent. Shaping space: architectural models revealed, a small and charming show at the Building Center in London (in collaboration with the V&A) illustrates the range of media and approaches, and suggests that it could be an art form in its own right. From movie sets to toys, the artefacts here suggest a field that is little known as a tributary of architecture but which has made its own material languages, ambitions, clichés and pretensions evolve.

Some of the things here look like abstract sculpture. Take Jorn Utzon’s model of the Sydney Opera House, its elements carved into a shallow convex dome. It seems to be a work of exquisite simplicity, although it belies the formidable artifice of architecture in the spectacle age (could anyone really understand by looking at it that all those shards and slabs were fragments of a single dome?). Or Le Corbusier’s wall model in his revolutionary chapel at Ronchamp, whose random openings closely resemble the background of Henri Cartier-Bresson’s painting “Madrid” from 1933.

Other things are troubling. The miniaturization of architecture can evoke, like the haunted dollhouse, the strange, the unheimlich (literally the uncomfortable). It looks like a building but it’s too small forcing you to crouch down to look inside. It is represented here by the strangely meticulous work of British model maker Andy Gent. A model, the setting for the 2021 animated short Save Ralph, represents a normal interior, slightly faded, possibly from the 1970s and clearly inhabited. That its inhabitant is a laboratory rabbit complaining to us about its afflictions – inflamed eyes, skin lesions, tinnitus – increases the unease around its plausibility.

Gent’s other contribution is a striking miniature street scene, a piece of Taxi driverNew York era, perfect in its details, from the fire escape and backlit windows to the metal trash can and garbage in the street.

There are remarkable contrasts. The large Victorian wooden section of Albert Hall (discovered in a cupboard a few years ago) is as much a piece of furniture as a model. Peter Barber’s clay and concrete model for a housing development project in the Thames Estuary makes it look like some sort of colorful kasbah. A 1930s model of a New York City skyscraper is glued to a stick, popsicle style, so that it can be seen not from an unrealistic level from a bird’s eye view, but as it might be seen in the city, from below. There’s even the building block set owned by radical architect Cedric Price, who likely built more using this set of toys than he ever did in real life.

The virtual model also appears, in the form of Forensic Architecture’s precise digital reconstruction of the interior of a Palestinian house hit by an Israeli missile, depicting in shocking detail the moment of impact, the trajectories of the shards. shells, bodies and the probable weapon, all to be used as documents of testimony.

Finally, the most meta thing in a show about models is the model of architect Roz Barr’s show in the final section. I almost wanted to look for a small model of myself peering at the model. Much is often made of the difficulty of an architecture to display in an engaging way. This small exhibition shows how easy, varied and enjoyable it can be.