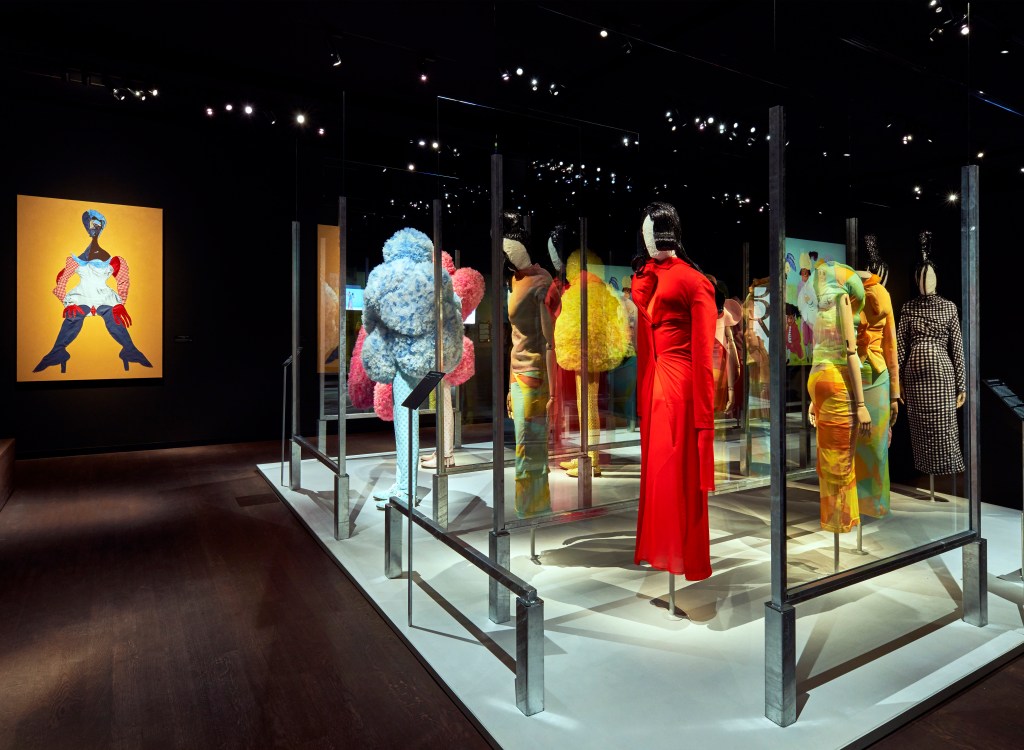 Whether fashionIn recent years, it’s been about challenging outdated ideals of beauty – whether they relate to racial, size or gender diversity – the ‘Mirror Mirror’ exhibition could be the astute answer to pursuing this challenge. and studying how we feel about it all.

A joint exhibition between the MoMu fashion museum in Antwerp and the Dr. Guislain museum in Ghent, which organizes exhibitions on the history of psychiatry in what was once Belgium’s first mental asylum, “Mirror Mirror”, which opened earlier this month, examines how fashion, psychology, self-image and identity intertwine.

It’s an unexpected fusion designed to bring out a dialogue about something quite mundane: people’s personal experience of their bodies and the impact of their adornment.

“For me, it was a great opportunity to look at how psychology relates to the body and the experience of our own body and self-image,” says Elisa De Wyngaert, one of the MoMu curators who has worked on the exhibition. “We usually have the body as a placeholder in the exhibition, it’s like a dummy or mannequin but it’s not really there, it’s just a support, a support for the clothes. And for me, it was quite special to focus on the body for the first time, in three different ways throughout the exhibition, and to really consider the impact that clothing has on our society but also on different bodies that we encounter as humans, substitutes for bodies such as mannequins and dolls, but also virtual bodies these days, avatars, so bodies from different sides.

The first of the three parts of the exhibition focuses on self-reflection where, as De Wyngaert explains, “the visitor’s own body is part of the experience”.

There, mirrors and walls of glass place visitors among avant-garde garments from brands like Comme des Garçons and Molly Goddard which, with their unexpected shapes, proportions and volumes, “truly defy the contours of the body and almost make a new body,” De says Wyngaert.

“As a visitor, you see yourself reflected in these creations and you are part of them,” she adds. “And for that part, we also have these Cyndia Harvey wigs to bring life to these custom mannequins that we display the clothes on in unexpected ways.”

It’s also about considering how clothing protects people mentally and can confer power and protection in some way.

“We need them, one, to play a certain role in society, that helps us,” says De Wyngaert. “But also, if you like to experiment creatively with your clothes, it can also protect you and give you strength as a kind of layer between you and the real world.”

The second part of “Mirror Mirror” takes visitors into the world of dolls.

It is “a kind of gigantic doll’s house in which the visitor becomes a kind of doll, a miniature [themselves]says De Wyngaert. In the oversized dollhouse, mannequins and dolls from the worlds of art and fashion — from the elegant fashion dolls of the Théâtre de la Mode who saved French haute couture to the macabre of Hans Bellmer — meet and mingle, but also send a message.

“We look at the layered meanings linked to these dolls and mannequins but also the psychological effect they have on us, because we meet them everywhere but they are not always very representative of the appearance of people. Or they have a certain specific image that is very outdated,” she says. “It’s also a reflection on me as a curator – how do you use such bodies, how do you present them in an exhibition space, and what messages do you send? you to your visitors when these dolls have a certain appearance?”

In the book accompanying the exhibition, “Mirror, Mirror: Fashion & the Psyche”, published by Hannibal and already available for purchase in Belgium (and for pre-order in the United States), of which De Wyngaert is co-author, a line reads: “The tall, thin, white mannequin with Caucasian facial features has become a standard in museums. It seems increasingly outdated, not least because of its denial of race.

Many museums, admits De Wyngaert, have long been guilty of relying on their existing stock of “standard” mannequins (read: almost always lacking diversity, especially in body shapes and sizes), in part because of the cost and partly because it was what was commercially available.

“It’s a standardized organism which is questionable in itself,” says De Wyngaert.

And she tries to approach that in two ways through the exhibition.

One, with a model in the likeness of Michelle Elie, fashion icon, editor-in-chief of Trouble Mag and ferocious collector of Comme des Garçons, who lent some of her pieces to “Mirror Mirror”.

“When she exhibited her archives in Frankfurt [for the 2020 exhibit, ‘Life Doesn’t Frighten Me: Michelle Elie Wears Comme des Garçons’ at the Angewandte Kunst Museum], with the curator there, they decided to do it on mannequins that look like him. So she had the models scanned in 3D, they look more or less exactly like her, skin color, facial features, they have a very nice bun in their hair, it’s the same. So the clothes fit her exactly as she looks,” says De Wyngaert. “It was an important political message because these bodies, bodies of color, black bodies, they felt – and it’s true – they were often excluded from these big white institutions. And in that way, she brought them into the exhibition space, not just as an object but as an active subject in a story. She’s there as a black woman telling her story so she’s not objectified, she’s really directing the story and telling his own story.

The other example of diversity in the exhibit is an alternatively proportioned mannequin created by Japanese artist and illustrator Ed Tsuwaki, who preferred to draw women with exaggerated swan-like necks and who at one point created a matching mannequin for her now defunct fashion. heap of bare mark.

“I thought it was great to play around with those unrealistic proportions to make it more of a art object and to see how it lingers a bit between being an art object and a commercial object”, explains De Wyngaert. “I think if you can create that spark, that tension, that energy then [the manikins] become not only placeholders for the body, but also something more interesting. I really hope, in my next curations, to always question the body that we use and always have an idea of ​​why we use a certain body and not just use the mannequins that we have here.

The third and final section of “Mirror Mirror” deals with the virtual world we are now entering.

“We leave the physical body behind and explore avatars and cyborgs both in an artistic context, because the art world has been experimenting with CGI technologies for a lot longer, but fashion is also exploring that territory a lot and the made more and more with the metaverse and NFT and avatars that you can dress Prada and Balenciaga [are] do it,” she said.

Video artist Ed Atkins closes the exhibition with an installation intended to elicit as much emotion as it does to fuel discussions about the future.

“It’s a video of a lonely male avatar sitting in a bar and it’s kind of a message of melancholy and loneliness from this avatar in this virtual world that just drinks and sings songs,” says De Wyngaert . “We’re leaving some wiggle room on what the future of the virtual body will be like and how we’ll relate to those bodies.”

Some fashion designers challenge old ideals better than others.

Issey Miyake was an early example of the use of clothing, some of which is part of the “Mirror Mirror” exhibit, to create new shapes around the body. Molly Goddard’s chunky pieces are also included for their ability to “explore a kind of space beyond the body through their clothes”, according to De Wyngaert.

“Through this she also has a feminist angle, she hopes that women will claim a place in society through their clothes,” she says.

Rei Kawakubo of Comme des Garçons is famous for bringing new forms to the catwalks and to the streets, and Simone Rocha has been doing it since her debut in 2010 as well.

“Simone Rocha has a beautiful dress in the show with an unexpected bump on one hip. It’s a far cry from what you expect from classic symmetry or an hourglass silhouette. Or Comme des Garçons, [Kawakubo’s 2017] ‘The Future of Silhouette’ collection which is really conceptual, a case of plaster almost around the body that shows how the body is contained by classical beauty ideals,” says De Wyngaert. “We do not show, in itself, a solution [to challenging beauty ideals]but the way they question it and propose new bodies, almost like a harness that protects the wearer and a kind of bodily neutrality, like creating a new body.

“Mirror Mirror” aims to combine playfulness and provocation by altering the way visitors think about things they don’t often think about.

“We show a new way of putting art and fashion together. And they are not illustrations of each other, but they come together to tell a new story and report on the same issues. I hope people will leave the exhibition, allowing these worlds to meet, these disciplines to merge,” says De Wyngaert. “I also hope they look at the body and its different forms in a different way.

“I’m aware that we haven’t told a full story about fashion and psychology, but I hope people will ask new questions after the exhibition or that it will open a conversation between people about what clothes can mean to you mentally, but also what effect dolls might have on you personally. And I hope it can become a new conversation among visitors and it won’t leave them hanging. I think it will move. ”

The “Mirror Mirror” exhibition is open now and will continue until February 26.

The Best Red Lipsticks For Every Skin Tone, By Makeup Artists